Something has to give with Anders Bjork

The season is still technically young, but one young gun has to either pick up his game or take a trip to Rhode Island.

Share All sharing options for: Something has to give with Anders Bjork

Last year, I wrote up Anders Bjork’s grade for the season, stating that there was plenty of room for improvement in Bjork’s game that could be given by simply playing him more.

Now, 22 games in, with 20 of those being ones he played, Anders Bjork has yet to make it to the heights he reached only a year ago, with the 12 points in 30 games he had last year seeming like a mountain nearly unclimbeable...or he gets 9 points in 10 games to at least match the total he had. Which is looking more and more like an unlikely thing.

Indeed, Bjork’s play has taken a noticeable dive and last night was it’s nadir: less than ten minutes, no (recorded) shots on goal, and a piteous night analytics-wise. To say nothing of the goal-against he was indirectly responsible for as he was sent to the box.

The most worrying part of this all is that it really isn’t much of a trend. His last goal was back in October, his last point was against Vegas two weeks ago, and his place in the lineup has been in constant flux due to injuries and a general lack of production on all counts, not just himself. Analytically however, it’s been no better. His PDO (TL;DR: how lucky he is) is not fluctuating that much, staying around the 100.81 mark for most of the season so far and having generally some of the worst analytics on the team: 2nd worst in xGF% , 4th worst in CF%, as well in FF%. The only players worse than him at getting unblocked shots to the net right now are Acciari and Kuraly, a pair of fourth liners that people prefer thinking about more for their defensive or physical prowess, and Ryan Donato, who is in Providence for this.

And again, I bring up his PDO. He’s not lucky, he’s not unlucky either. This is just who he is right now. He simply hasn’t shown any progress and has in fact regressed from last year. 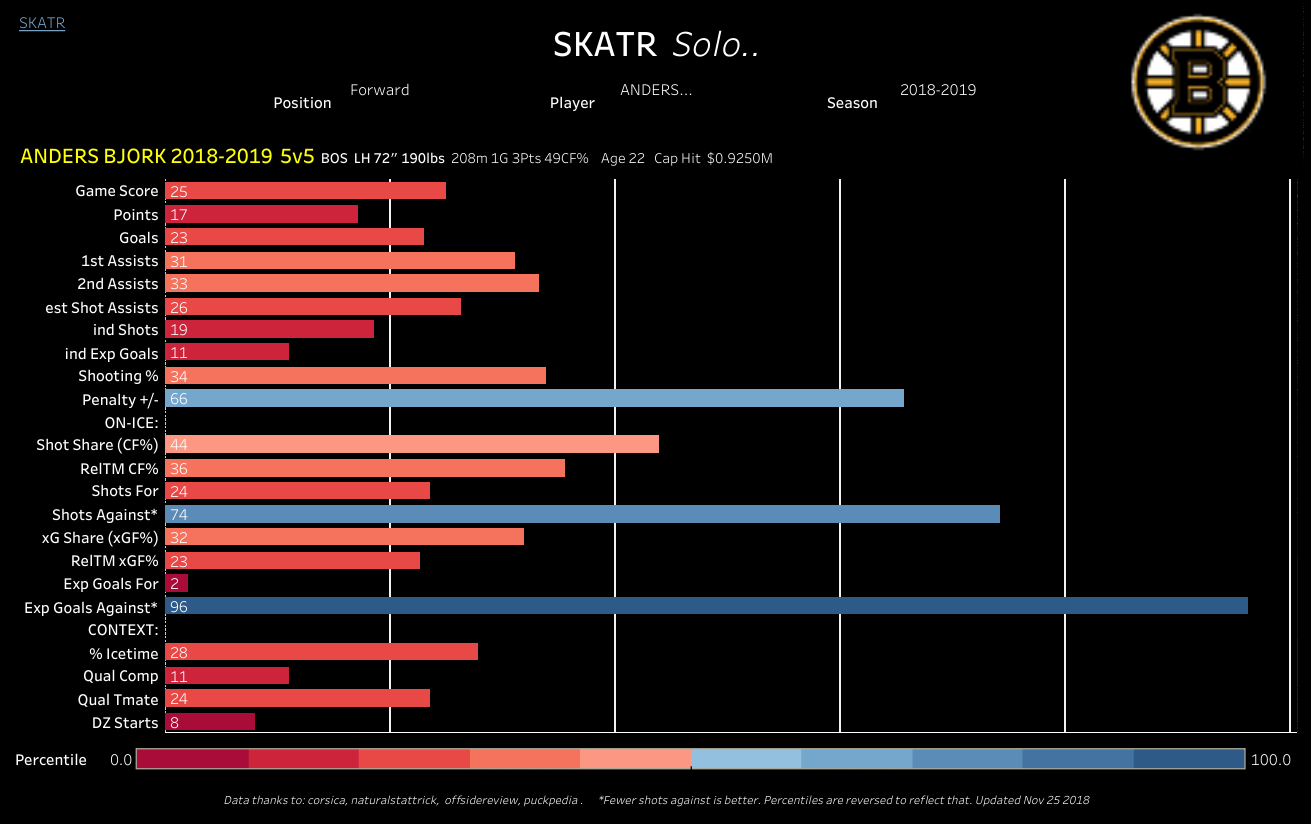 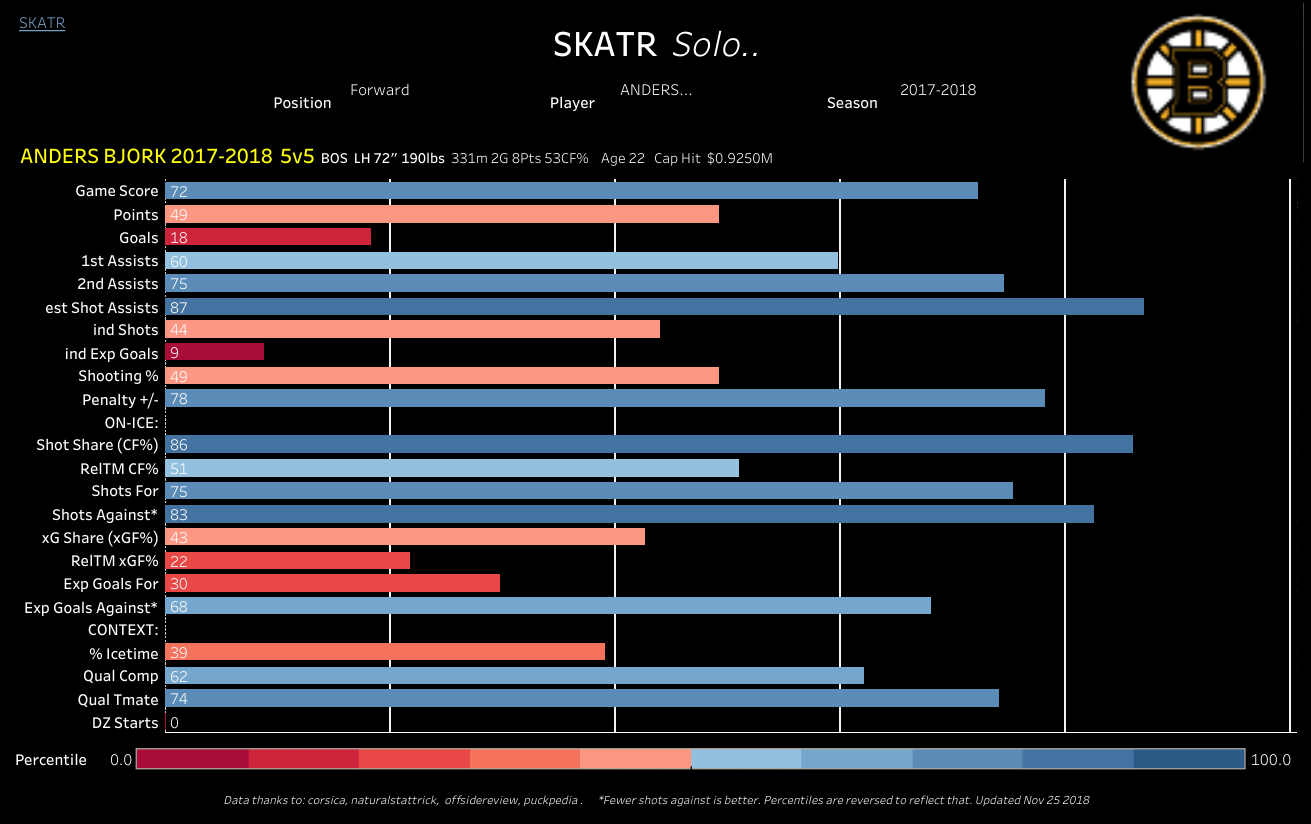 If there’s anything that can be said as a positive, at least his shot suppression hasn’t exactly waned much, if anything, it’s improved a bit. That’s fine at least.

And the most aggravating part of it all is...most nights? Eye test says he looks fine! At least from a perspective of keeping the pace of play. He tends to do the right thing on the boards, tends to be at least attempting to move the puck up ice, but the second he enters the offensive zone it’s like a whole new player emerges; one who has trouble connecting on passes, can barely get shots off and if he does it’s fairly low danger, and is frequently getting run down by opposing defenses. It’s maddening to see a player work hard in one area of his game and the part he was praised for as a Notre Dame player (being able to take over shifts and shoot well), has just vanished.

But as always, there’s opportunity where a problem presents itself, and there are a few options to try to try and improve Bjork’s existence as a Bruin.

Option 1: A week or two in Providence while another player takes his place.

Given the nightmare of the game he had last night and his current dry spell, I wouldn’t be super shocked if this was the course of action Bruce and company decided to take. Providence has been on a bit of an upswing even without a good portion of their defense in tow, so it might be the best thing for him to regain some of the confidence he had last year with the Baby B’s.

Donato, Cehlarik, Blidh and Fitzgerald are all wingers who have shown in the relatively short Providence season that they can in fact produce. Donato’s probably learned his lesson by now (to the tune of 9 points in ten games), and Celery and Fitzgerald are probably chomping at the bit to finally get a real honest crack at the Bruins lineup if the youth of today are still struggling. Hell, we straight up advocated for Cehlarik’s inclusion at the beginning of the season!

After all, him sitting in the press box clearly didn’t work if this game was any indication. So why try that again?

Frankly, I’d like to see what Peter Cehlarik can do. Can’t be much worse than how Bjork’s run has been so far.

Option 2: Take a chance on him and promote him up the lineup

The logic here is simple: The third and fourth line is a psychotic carousel of disparate parts because everyone is either hurt or the player who was there at the beginning of the year hasn’t shown enough of that good ol’ NHL “pace” that also happens to contribute to not being a total disaster on-ice. The top six meanwhile, has had...some level of consistency, so having someone who he could in fact help setup like say...Jake DeBrusk? Might take the strain off of his currently pretty desperate play.

One big problem with this theory is that, in a perfect world, you’d probably want him playing with the players he had the most success with last year in order to help even his game out, and the big problem with that is the Center he had the most success with...is out for a month. It’s a risky play given how those lines have reacted to the loss of Bergeron, but there’s a possibility he could improve with David Krejci and Colby Cave.

Frankly if he’s still having games like this one, I think this option is far from the best, since it didn’t seem to do much for him the last time.

But y’never know, maybe Cassidy skates him into the ground over the week and then scratches him just to really prove his point. If that doesn’t get the message down that he needs to get his act together, not much else will.

Option 4: Just keep plugging away with the same deployment

It’s a bad option given the results so far, but it’s still an option.

Whatever the case or whatever the Bruins decide to do with Bjork, the fact is this; he needs to start showing improvement, and soon. He has shown he can keep up with the game as it is. He can keep up with NHL defenders and attackers. But he seems to be missing whatever it was that made him such an intriguing player to begin with last year and it is costing the Bruins valuable points in the standings in a competitive Atlantic. Bjork has to be better.

Or he has to be out of sight and mind for someone who can. Something has to give.

...I mean, they certainly can’t just trot him out as an excuse for a cheap crowd pop in South Bend this New Years, can they? What’s that gonna serve in the grand scheme of things?

What should the Bruins do with Anders Bjork?