RUMORS: Bruins are apparently looking at Patrick Maroon, is he actually worth it?

Large, American, Cheap, and apparently for sale. Is he the answer for Boston?

Share All sharing options for: RUMORS: Bruins are apparently looking at Patrick Maroon, is he actually worth it?

CBS Sports-Boston and 98.5’s webpages have recently buzzed about the Edmonton Oilers winger Patrick Maroon and the apparent interest the Boston Bruins have in him.

Maroon’s gonna be 30 right around April, which is coincidentally the number of points he is two points shy of, and has long been a thorn in Boston’s side in recent contests against the Oilers, currently commanding six goals in his last three meetings against the Bruins. Granted, the Oilers are pretty trash right now, and appear to be poised to do anything they can to both salvage their season and probably save Peter Chiarelli’s job, so him being up for grabs doesn’t seem to be completely out of left field. And with an attractive 1.5 million dollar contract that expires at the end of this year, he seems like a pretty

Maroon is a 6’3, 225 pound Left Winger who’s currently sitting on a scoring tally of 14 goals and 14 assists on the year. His size and physicality have earned him the name “Big Rig” around Edmonton, and he more than earns it with strong physical play on the boards and in front of the net, more than a willingness to use his fists to stand up for his team, wrapped up in a nice bow with a lot more speed than you’d expect from a guy like him. Last year, he ended up with his highest point total ever, with 42 points.

Visuals for Shots taken and where with/without Maroon on the ice: 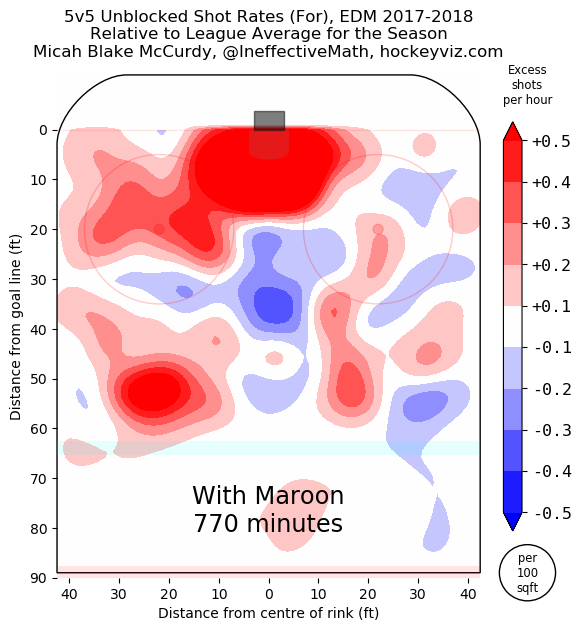 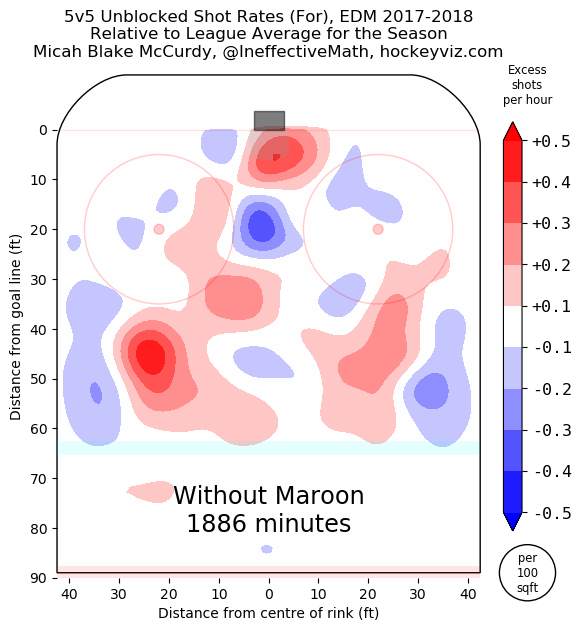 I’m sure this will shock you, but a big guy like Maroon’s wheelhouse is being directly in front of or in general proximity of the enemy netminder. The Oilers shooting without him directly on the doorstep shoots down considerably near the slot and has been a rare bright spot on their fairly bleak season.

Visuals for Shots allowed and where with/without Maroon on the ice:

Bear in mind before you see this that the Oilers are a screeching disaster careening off a cliff headed towards a small mountain village on defense across all players and situations. Now that I've said that... 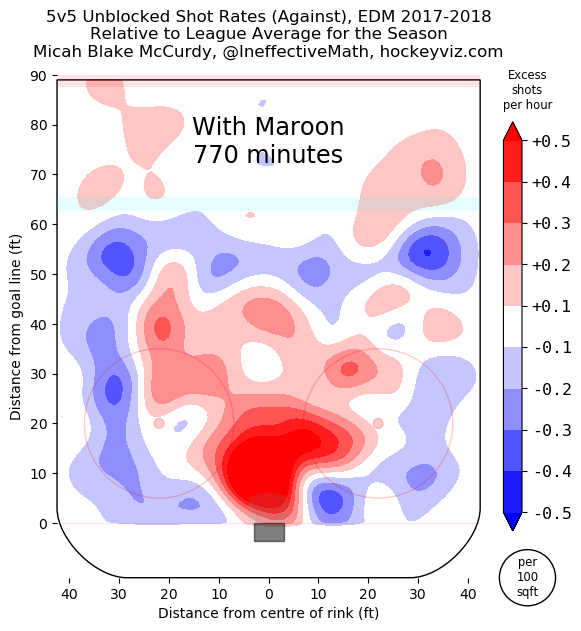 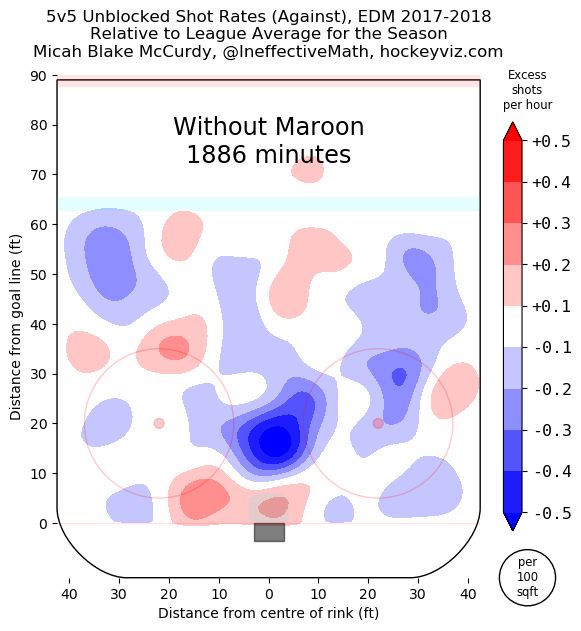 Yikes. His net-front defense is a sight to behold. For reference, guys like Ryan Spooner and David Krejci are better net-front defenders than Maroon has been. Across his career?...Things don’t necessarily improve, I’m sorry to say. This would have to be brow-beaten into the guy from day one, since it doesn’t seem from his career perspective that he’s been fantastic in front of his goalie.

So yeah, offense first is probably the best way to use a Patrick Maroon-type player, if you have one.

What would he cost?:

Supposedly, the Oilers aren’t looking for a major prospect or a first round pick, and that’s fair, really. I mean...why bother, with how they’re playing, they’re probably in line for another first overall pick. What that doesn’t leave out as a possibility however, is a roster player, and there are plenty of quality young players to choose from on Boston’s end of things.

Players like Pastrnak, and Krug are obviously off the table because they don’t actually fill an Oilers need and also Don Sweeney would like to keep his job. Which means players like Anders Bjork, Jake DeBrusk and Danton Heinen are prime targets that could fill the need for the Oilers. Especially prominent here is DeBrusk and Heinen, as they currently occupy middle six winger spots Maroon would be most comfortable playing in.

Then there’s the ever present possibility of dealing In-betweeners like Austin Czarnik or Peter Cehlarik, whose costs are negligible and clearly both have promising futures in the NHL with proper seasoning and ice-time. Whether or not it’s with the Bruins is based on how the organization feels about them, and could be attractive to a team that’s trying to get faster. The cap crunch on the other hand would be...interesting, but he’s a rental, so who cares about that.

Another possibility would be an almost one-for-one deal regarding Ryan Spooner, who is earning around 2.8 million at the moment and fits the free-wheeling, offense first and foremost nature of the Oilers. Regrettably however, he also doesn’t quite fill a need going the other way.

Where would he fit?:

See, that’s the fun part of a Patrick Maroon acquisition. Or the deal-breaker, depending on how you look at it.

Maroon right now slots in as Edmonton’s first line LW. That, obviously, is not where he is going to be if he were to be acquired by Boston, and yet...nearly anywhere else, there’s someone there that either needs the ice time to try and improve their games, play to their strengths, and get better (DeBrusk), is a super flexible, slot-in-anywhere kind of player who makes the Bruins better just by being on a line (Heinen), or one of the better 4th liners in hockey (Schaller). Someone would either be going the other way, or someone would be sent to Providence.

Really, the best place I could think of for a huge guy like Maroon is on the 3rd line with Nash and Backes. While those two are sort of built to help make up for his defensive flaws, both really could benefit from a guy whose willing to make those low-danger chances they get on goaltenders to force a faceoff and turn them into potentially dangerous scoring opportunities.

Would he actually be worth it?:

I’m gonna be honest and say I’m on team “Don’t change this good thing you’ve got going for bulls#!t, unnecessary reasons.” regarding the Trade Deadline, and while he’s a cheap rental, it’s really hard to look at what he does in a vacuum and in context and say it’s really worth the shot if it means giving up youth for maybe a shot at longer postseason contention. And that is not a guarantee he’d even produce at a rate higher than any of the rookies and youth. Whose to say he won’t come all the way back to earth and then some if you take him away from one of the most obviously super-skilled players in the entire world like Connor McDavid?

He’d be picking up minutes on a team that’s already got plenty of scoring players, plenty of power play technical wizards, and if you prefer things like veteran largeness and PUNCHGRIT as a valid reason to part with one of the young wingers, players like David Backes, Adam McQuaid, Kevan Miller, Noel Acciari and Zdeno Chara are all the large humans that can do harm to players if it really comes to that. Some of them have even been in the league longer than a half-decade. He only marginally fills a need that, given time, the DeBrusks and Heinens of the world could fill on their own.

Could it actually happen?:

Maybe, but I doubt it.

Conventional wisdom says Boston loves them some power forwards, but in reality, fans tend to go back and forth on them; liking the highlight reel stuff, occasional fun quote and hitting...but tend to sour on them real quick if they don’t produce like Cam Neely. Moreover, the rumor seems to come from the idea that players labeled as “Bruins killers” are somehow something Boston needs to have. If that were the case, Thomas Vanek would’ve been a long-term signing at some point.

Furthermore, Boston is usually pretty quiet in trade deadlines due to internal commitment to developing players from within, or because of cap constraints, or simply because they’re playing strong overall and don’t feel a need to open up the checkbook for a fresh face. All of which kinda sounds like this year’s team.

But this is also Boston. Weirder can, has, and does happen.

I turn it over to you now, and let you decide amongst yourselves.

If given the opportunity, should Boston go for Patrick Maroon?