The Bruins paid too much for Rick Nash

Fans love a big name, but was Nash worth the cost?

Share All sharing options for: The Bruins paid too much for Rick Nash

The big trade deadline news finally broke and 6x All Star winger Rick Nash is a Boston Bruin. Even bigger than the news of Boston acquiring Rick Nash, is the high cost the Bruins paid for a few months of his services. The Bruins gave up their 2018 1st round pick, a mid grade NHL defenseman prospect in Ryan Lindgren, a RFA left wing in Ryan Spooner, a buried contract in Matt Beleskey (50% retained by Boston) and finally a 2019 7th round draft pick for Rick Nash and half his $7.8 million salary.

Let me be clear right from the start, Rick Nash is easily the best player involved in this trade, that really isn’t up for debate. However, what is up for debate is whether paying all of the pieces mentioned above to slightly upgrade your 2nd line right wing spot was worth it. Most people in Boston are ecstatic that the Bruins landed a name brand, former 40 goal scorer in Rick Nash, with the common consensus being the Bruins had plenty of picks and prospects to give up, and this is the year to go for it.

In all honesty I agree in principle that the Bruins should move prospects and picks this year, I just don’t agree that Rick Nash was the player worth doing it for, and not at those prices. Listen, this trade isn’t going to sink the Bruins going forward and it probably won’t “mess up the chemistry” despite Ryan Spooner being well liked in the locker room. The real question is did the Bruins really need to give up so much for a rental player approaching 34 years of age? Furthermore, did the Bruins at 6th in the league in scoring, really need to upgrade their scoring? Personally, I don’t think so. Even if they did, Rick Nash has exactly 3 more points than Ryan Spooner, who is younger, cheaper and more likely to have been in Boston next year.

I know what you are thinking right now, yes Rick Nash played for a bad team in the New York Rangers, a team without great center depth, Ryan Spooner is inconsistent etc, etc, etc. Each of those is true to varying degrees but let’s take a quick look at the last three seasons for each player:

Surprised? The two aren’t quite as far off from each other as most would have you believe. Now Nash is a far more skilled goal scorer of course, but as a whole he isn’t that much better than Spooner. When you consider that the Bruins would likely have been able to re-sign Spooner (RFA) at the end of season to a reasonable deal, and that Spooner is almost 8 years younger and can play Center if needed, the trade seems worse than initially thought. When you factor in the other pieces, like the 1st rounder and Lindgren it seems like an objective over payment for a player living more off of his previous success than his current ability. Below is Rick Nash’s Shots For both with and without him, then Ryan Spooner’s below his. The Bruins generate more shots with Spooner on the ice, than the Rangers do with Nash on the ice. 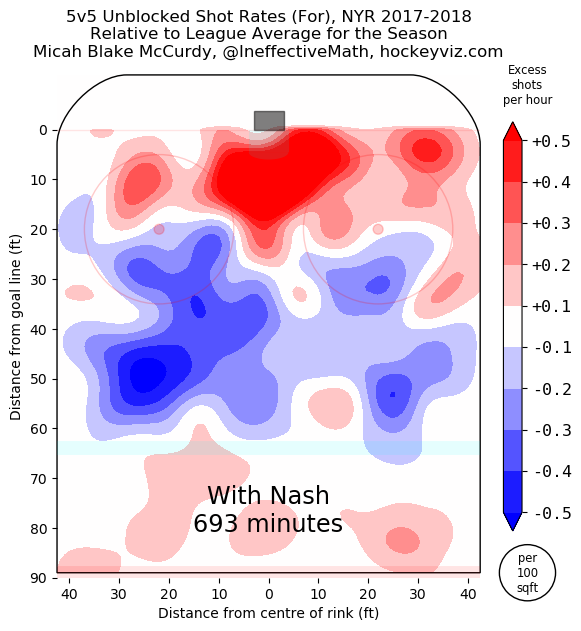 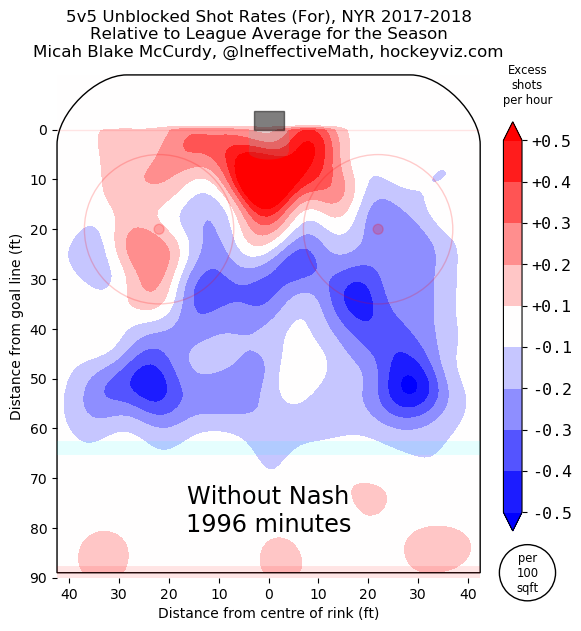 Shot For With & Without Nash
HockeyViz.com and Hockeyviz.com 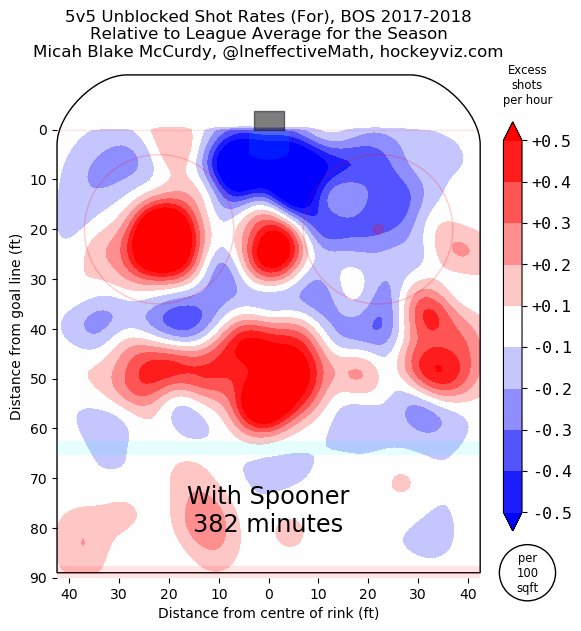 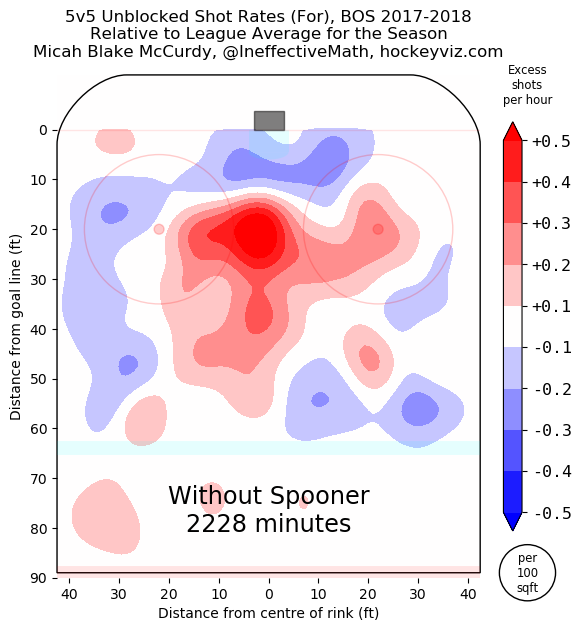 Fans have been quick to point out that Nash provides more value defensively, on the penalty kill and perhaps even the power play. The two are fairly even on the power play in terms of shot generation and point totals, but Rick Nash plays an average of 1:44 a game on the penalty kill. Great right? Not so fast. Take a look below and see how effective he is killing penalties. 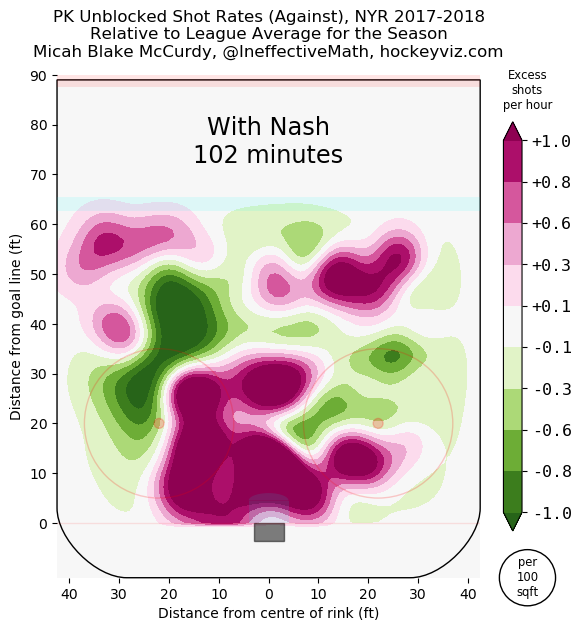 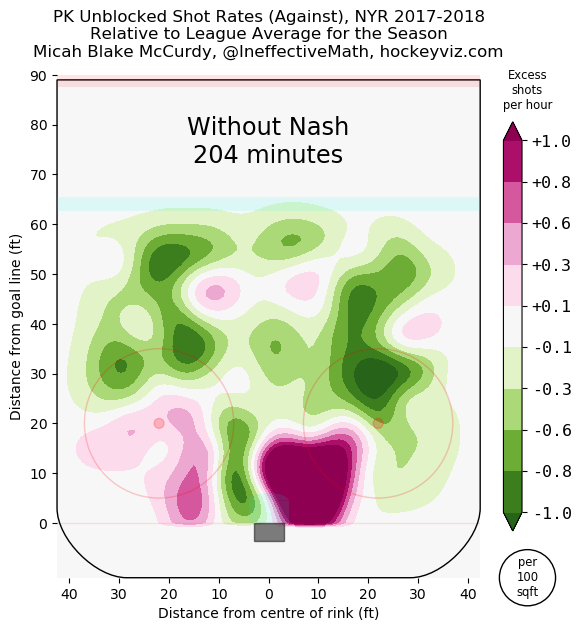 So now that we have established that Nash isn’t far better than Spooner, let’s take a look at the other components involved. For context, Lindgren isn’t a top prospect, and that’s important to note, but he is likely a NHL player if he reaches his potential. The Bruins 1st round pick is going to be a late pick and isn’t quite as valuable as some may think, but when you add all of this together? It’s too much for a player that in my opinion isn’t pushing the Bruins into being Stanley Cup favorites.

Acquiring Rick Nash and including Ryan Spooner actually dropped Boston’s projected wins by 0.16 according to my model...

When you even out the score, the Bruins traded a late 1st round pick, a likely bottom pair future NHL defenseman, a 7th round pick, a younger, cheaper 2nd line LW for a few months of a player with three more points than Ryan Spooner and $875k in cap space from Beleskey’s buried deal. That’s an over payment, one the Bruins can afford sure, but it’s an over payment nonetheless.

“But after that, I do worry about if we subtract somebody from the room. If you’re adding and you’re not subtracting, i.e. future assets, then as a coach you always prefer to go that way. But Donnie will do what’s best and as a coaching staff, we’ll take it from there, so to speak. But there is a good chemistry with that group ... a very good chemistry in that locker room.” - Bruce Cassidy 2/22/18

The Bruins have to hope trading away Spooner doesn’t mess with the locker room chemistry on a truly tight knit team for a slight upgrade on the wing. At the end of the day, deadline deals always cost more than the average deal, and the Bruins didn’t give up any of their star prospects, but they did change their roster and paid a premium price for an older player that they have to hope can re-find a bit of his former scoring prowess for Boston. It isn’t the worst deal, and the Bruin can afford it, but it is far from a slam dunk move for Sweeney.