Boston’s Defense blows Toronto’s out of the water

This was going to be objective, but to do that requires me to be honest. So here’s me being honest.

Share All sharing options for: Boston’s Defense blows Toronto’s out of the water

This would’ve been an objective review of the Boston Bruins defense pairings in a similar way to the forward post that went up earlier today. Lots of analysis and such.

Well, I could do that, but honestly, Sean Tierney’s visuals can tell you a much...much better story than I ever could.

Namely, I want to look here at a chart and visual with you for a second.

And I want you to note the number of Leaf logos that are indicated as “bad” on this:

Edited for clarity: For reference and clarity’s sake, Carry-in% is the percentage of controlled zone entries allowed by the player, which is important because many teams like setting up their attack by having control of the puck. Possession Exit% is the percentage of which the players has control of the puck and gets it out of the defensive zone themselves. Notice, that half of the Leafs defense cannot be described as anything other than just bad at defending and getting the puck up ice. Isn’t that something?

In fact, even the good players on their defense have some...curious quirks to them.

But oh, you might be saying, isn’t Adam McQuaid not on this? Surely you know how he is in comparison to players on the Maple Leafs, right?

But what I’m going to do is play a game with you! You get to play “Is this Maple Leaf better analytically than Adam McQuaid?”

So let’s go down the line!

Is the Maple Leafs defense better than Adam McQuaid?:

The magic number you want to remember is 51.23%, Adam McQuaid’s even strength Corsi-For%, and this is important...This the benchmark of which a player on the Maple Leafs better than the least impactful shooter and possessor on the Boston Bruins, which is fine for McQuaid, because his job is usually “passer to puck carrier” and “win battles for puck in corners” kind of guy. This is very important because I want you to know that this gets hysterical.

From the Top pairing down:

Yeah. You get the picture.

Yeah. Our dear friend Micah over at Hockeyviz now has over 3000 minutes of time between Toronto and Boston letting shots hit their goalies, and I’d like to share with you just how much of a disparity this is. 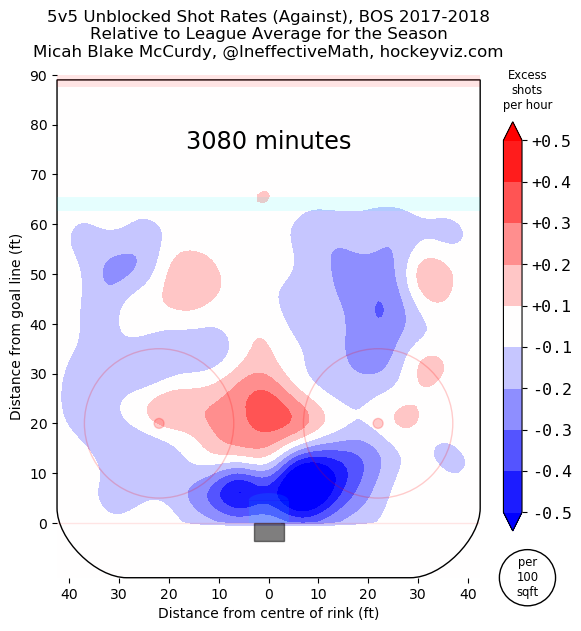 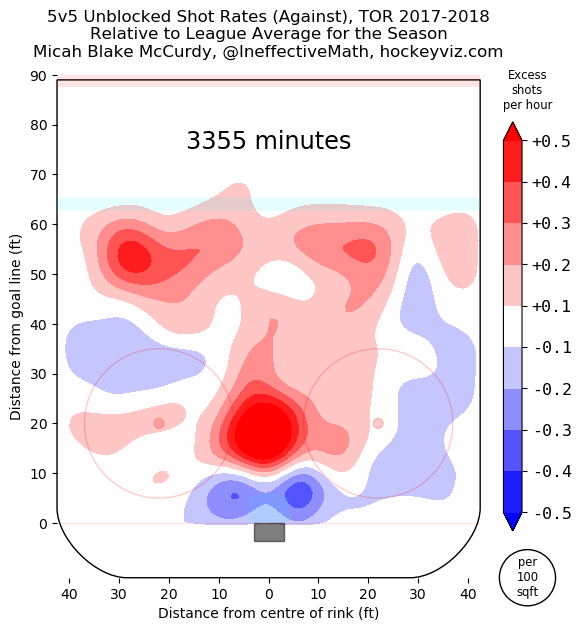 So what does this actually tell us?: