Share All sharing options for: Zdeno Chara is still the Bruin’s best defenseman

Seriously though, even at the ripe old age of 100 40, Zdeno Chara still helped carry the Bruins past the Toronto Maple Leafs and into the second round of the playoffs. His usage was modified by Bruce Cassidy, seeing virtually no power play time (0:23 ATOI), while still being utilized as the go-to defenseman on the penalty kill (3:39 ATOI). His overall time on ice average (22:54) went down to it’s lowest since his first season as a Senator (2001-02), having had as much to do with the Bruins defensive depth as it did with resting the aging rearguard. As odd as it may sound, the 20 year NHL veteran noticeably worked on his skating during the offseason and it showed, particularly early in the season before fatigue took over.

Despite not receiving time on the power play, Chara still finished with 24 points, good for 3rd on the team behind his partner Charlie McAvoy, and offensive star Torey Krug. The 2017-18 season marked the first time Chara did not score a single power play point since the 2000-01 season. While not being relied on for his offensive production at this stage of his career, the Bruins even strength offense statistically performed better when Chara was on the ice, as shown in the slider below. 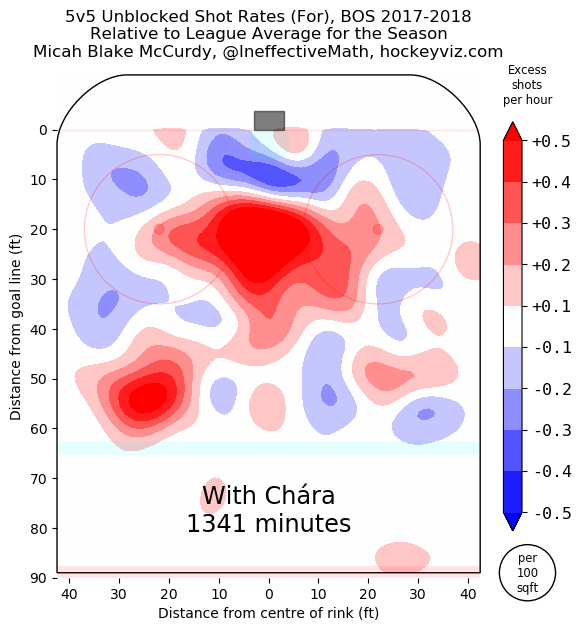 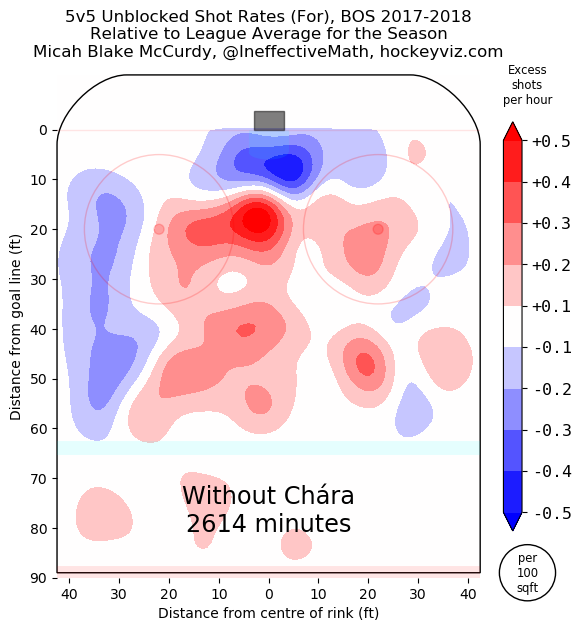 As has been the case over the last handful of seasons, Chara was paired primarily with a young defenseman and asked to mentor him, this year with future star Charlie McAvoy. More so than last years edition with Brandon Carlo, this version was more symbiotic, making it harder to tell who was “propping up” who. As best as I can tell, it was a little bit of both, with Chara’s reliability, IQ and positioning helping out the younger McAvoy, and McAvoy’s skating and mobility pairing well with an already slow player valiantly fighting Father Time. Regardless of who carried who, the duo played well together and will likely be the Bruins top pair to start the 2018-19 season.

Aggregate Grade: B+ to A-

At a certain point fans and media will probably stop being surprised when Chara continues to defy the odds, remaining a legitimate number one defenseman, despite being one of the oldest players in the league. Will he start to show his age in 2018-19? Maybe, but with him I wouldn’t bet on it. For now, he remained the Bruins best defenseman (despite many claiming otherwise) facing the toughest competition and usage, served as the perfect mentor to his eventual replacement in Charlie McAvoy, and continued to be the accessible, respected and accountable leader the Bruins have come to expect from their Captain, on and off the ice. The Bruins unsurprisingly agreed and quickly re-signed him to a one year deal. While he will likely see a decrease in ice time next year, he still looks to be the Bruins number one defenseman at 41 years old, while McAvoy grows into a more well rounded player. Zdeno Chara is still very good, don’t let anyone tell you otherwise.

Scoring on the Leafs in Game Three