Who should sit with Charlie McAvoy coming back?

Everyone’s favorite babyfaced defender is coming back full-time, and a spot needs to be made. Who should take a seat?

Share All sharing options for: Who should sit with Charlie McAvoy coming back?

After weeks of a particularly gross foot infection keeping Charlie McAvoy “Day-to-Day”, the premiere young talent on the blueline for the B’s is finally coming back to play full-time. For reals. Fingers crossed. Wood knocked.

But...therein comes the problem. The B’s still have a surplus on defense that needs addressing.

And the big question is...Who sits?

The argument for sitting John Moore:

Don’t get me wrong, John Moore has been fine, in fact he’s been quite useful with the litany of injuries the Bruins have suffered on their back-end. To say he’s been much more than fine would be a little bit of a stretch, however. Moore is a strong case of “eye-test” vs. “fancy stats”, in that he is quite gifted, particularly as a skater, which is by far his best strength. This translates well to evaluating his play by watching him as he appears fluid. However, his career results from a stats perspective have ranged from disastrous to suitable depth player. This season, perhaps his best to date, hasn’t been drastically better from that perspective. The slider below shows his last three seasons (left), contrasted with the 2018-2019 season so far (right). 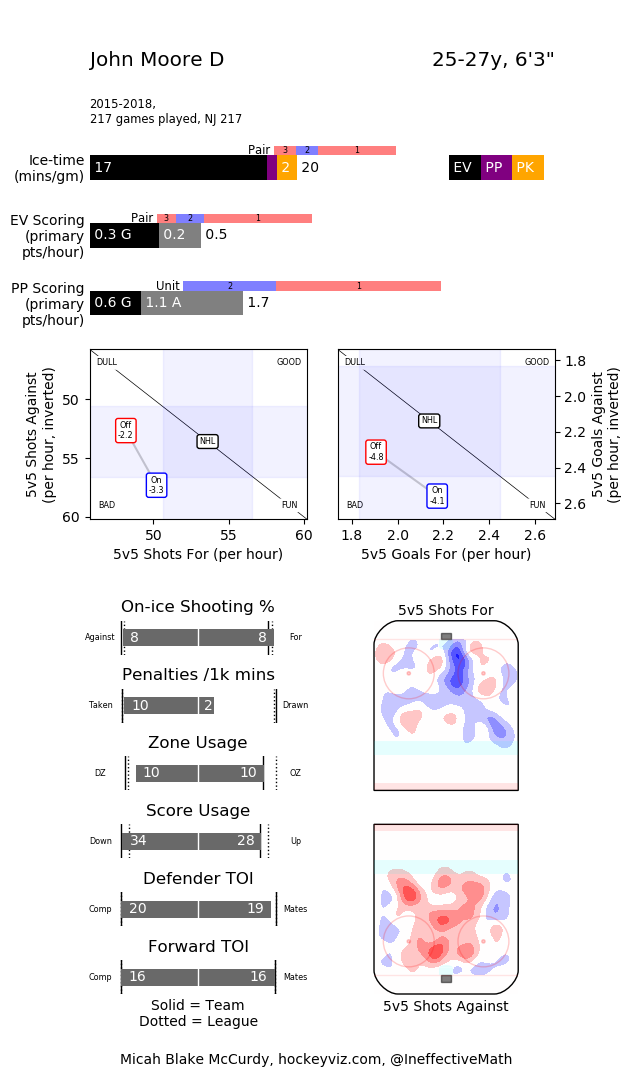 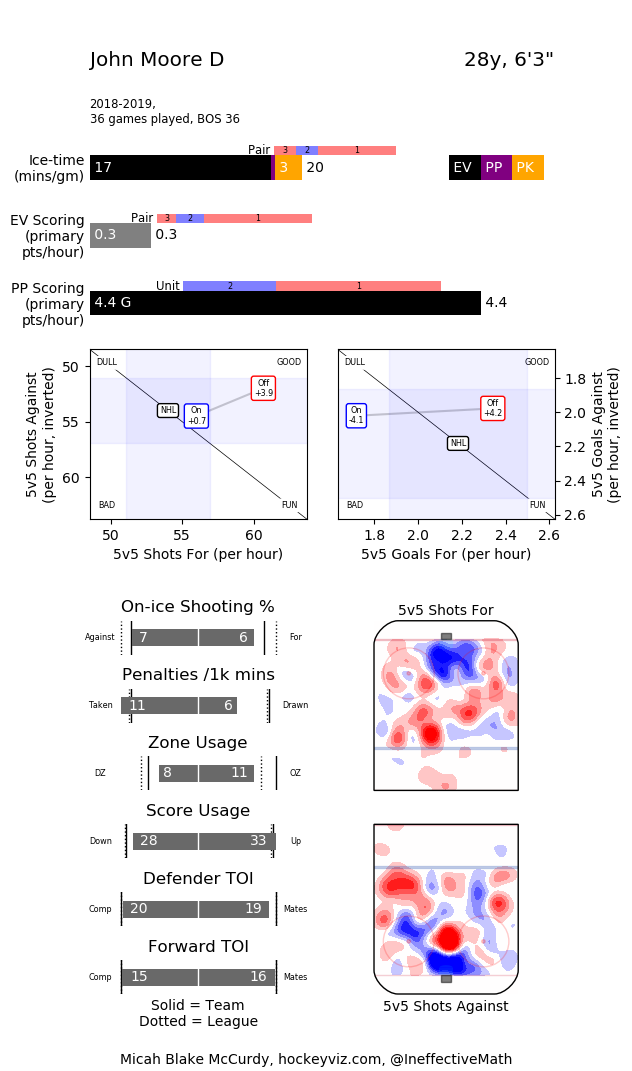 Moore has always been rough in the defensive zone and has been counted on more sparingly to kill penalties in seasons past, until the absence of Chara, Carlo and others pushed him up the PK depth chart. While he has done what was asked of him, he’s primarily a 3rd pairing, or depth defenseman. When teammates, usage, deployment and quality of competition are removed, as Micah from HockeyViz’s new model has done, he looks particularly poor.

At the end of the day, the chances of the team leaving their newest long term contract sitting in the press box halfway through contract year one are pretty slim, even if the other 6 NHL defenseman not named Kampfer are more skilled and/or versatile. Instead, the Bruins will likely choose to rotate players out for rest, assuming the defense can actually stay healthy for more than 60 seconds, that is. Really, they should, as Shawn from our site explained in detail last January.

The argument for sitting Brandon Carlo...strategically:

Now this one might be a harder sell, and I understand why. From the eye-test perspective and from the fancy numbers, it really does look like a lot of the quirks and kinks in Carlo’s game are at last finally settling down, and he’s looking exactly like the kind of player Boston needs right now who can both skate the puck out of the defensive zone with reasonable consistency and also retrieve the puck and break up plays. He’s seen some of his best work on the man-disadvantage this year, and arguably speaking? He could be the Bruins best penalty killer. Yes, even better than Bergeron. So why the hell would you ever take him out now of all times when it finally seems like he’s got the momentum rolling?

Here’s the thing. I am doing arguing doing this for his own good.

Brandon Carlo is a player with apocalyptically, terrifyingly specifically rotten luck. The last two seasons have seen him get taken out for the rest of the year because of a freak injury that in the long run might’ve been disastrous for the B’s in the long run. And Carlo has soldiered the large workloads of 70+ game seasons dutifully, but with the wealth of defenders Boston can call on for a game or two, even just for a game against the Kings or something like that...you can afford him the opportunity to rest, and way more importantly, keep him away from those late season games that seem designed to harm him and him specifically.

If nothing else, he has earned his rest, especially this year.

Of course, You Don’t Have to Worry About it if You Trade A Defenseman:

I know, I know, crazy talk, what with all the injuries the Bruins have seen on the backend, right? Not really. The Bruins have 8 true NHL caliber defenders on the roster if you include Steven Kampfer, plus Urho Vaakanainen, Jeremy Lauzon, Jake Zboril and Connor Clifton all in Providence. Each Providence player played varying levels of NHL minutes already this season, with Lauzon in particular looking capable, as well as Vaakanainen in a very limited look. The difference between the Bruins depth NHL D-Men in Kampfer and Moore, and Vaakanainen/Lauzon isn’t particularly large, and in the case of Moore, you could gain some salary cap room to perhaps use for a Center or Winger (Hello, Silfverberg).

While the Bruins could theoretically trade any of their defenders not named Chara, let’s focus on Kampfer and Moore as they are the closest to the Providence players in terms of skill. Kampfer would likely bring you very little in return, and he only costs $650k. In truth, he’s pretty close to the perfect 7th defenseman, as having him in press box allows prospects to see regular playing time, and he’s both cheap and reliable. As such he likely has far more value to the Bruins than to another team via trade.

Moore on the other hand has seen his performance rise with the Bruins, and correctly or not, is viewed as a much more skilled player. For reference, Nick Holden cost the Bruins Rob O’Gara and a 3rd rd pick, Adam McQuaid fetched Kampfer, a 4th and a conditional 7th during the offseason. If the Bruins can get a similar return for Moore, while also clearing $1-2 million of their cap for the 2018-19 deadline and the following 4 seasons? They should be seriously considering it. Of course, whether or not the GM who just signed Moore to an oddly long 5 year contract will be willing to then trade that player away is a question for another day.

Hey what about Krug and Grzelcyk-

That’s upcoming. Let’s focus on the guys who are in Charlie McAvoy’s path for right now.

While the pipe-dream of “having a healthy roster” is finally within arm’s reach; with choirs and angels singing around it, the best problem to have is to have too many guys who can do a job. And thanks to the way the roster has shook out, there’s a unique opportunity here for every player, fan, and the team itself to get what they want if the Bruins think tactically about this: Players get playing time (and also healing time), Fans get to see more Charlie McAvoy and the depth behind him play fresher and better than they’ve had with the previous deployments, and the team might have a better opportunity heading into the late season and postseason because everyone has had a smarter, easier-on-the-body deployment.