Say what you will about Cam Neely, the President of the Boston Bruins. Since Neely was named as the eighth president in club history, his role has been highly criticized by fans, to the point where many thought he should have been removed of his duties at the same time as GM Peter Chiarelli. BUT say something negative about Cam Neely the hockey player, and you’re asking for trouble. During his time as a Bruins, few players in NHL history have ever stricken fear into the hearts of defenceman heading back for the puck more than #8. Add on top of his menacing physical presence, his ability to find the back of the net, and you have one of the greatest power forwards ever to lace up the skates.

For me, Cam Neely, was and is the definition of a Boston Bruin. He is still (although

Bergy is probably a close second) my favorite Bruin of all time, and on October 12, 1986, in the third game of the season against the Hartford Whalers, Cam Neely arrived in Bruins’ History

Flashback to summer 13 years ago, and the Boston Bruins were just coming off a disastrous semi-final against the hated Montreal Canadiens, where they lost their best of 5 series, in the worst way possible: 3 games to 0. The team at the time was full of grizzled vets and upcoming stars, like a young Raymond Bourque, however the brutal loss in the playoffs to the Habs, meant something had to give. On June 6, 1986, Harry Sinden pulled off a trade with the Vancouver Canucks that would go down as one of the best deals ever for the B’s, while being seen as one of the worst for the Canucks. Sinden sent 25-year-old Barry Pederson to Vancouver for a relative unknown at the time, right winger Cam Neely and the Canucks’ 1st round pick in the 1987 draft. At the time of this deal, Pederson was an emerging star in the NHL, posting two 40 goals seasons by this point, however the Bruins coveted Neely’s size and offensive potential, despite only scoring 14 goals the previous season. While this trade seemed quite loop-sided at the time, there isn’t a Bruins fan who wouldn’t make this deal today. 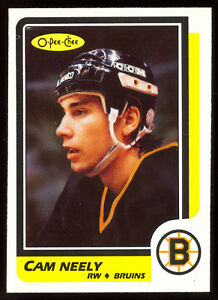 Through the first two games of Cam Neely’s Bruin career, Neely mustered 1 assist, with the Bruins losing both games to the Flames and Devils. In game three, though, Cam Neely came alive. Playing on the 2nd powerplay line, with 16 seconds to go in the 1st period, Neely registered his first goal as a Boston Bruin. About 7 minutes of game action later, Neely scored once again to give the Bruins a 3-1 lead. The game would end up being a rout for the Bruins, as the easily won 7-2, however this game will best be remembered as a start of a new era in Boston. Neely would end up scoring 36 goals that season, to go along with 36 assists, and 143 PIMs. Pederson interestingly enough would go on to have a couple of really decent seasons in Vancouver, however injuries soon became in issue for Pederson and he bounced around the league before playing the last game of his career as a Bruin in the 1991-92 season.