Kovalchuk got placed on waivers. Boston should probably just let him pass.

One of the more spectacular disasters of the past three years finally hit the waiver wire. Should Boston pick him up?...mmm, No.

Share All sharing options for: Kovalchuk got placed on waivers. Boston should probably just let him pass.

I sincerely cannot believe there are people in 2019 who still think this player at his age has value. But...here we go...

How did we get here?:

Ilya Kovalchuk was, in the not-too-distant past, part of a Devils team that could reasonably call itself “Good at hockey”, and one of the main pieces in an increasingly forgotten piece of hockey ephemera known as the “Thrashers”. It was an interesting time!

Anyway, Kovalchuk was also one of the last truly gobsmackingly dumb contracts given out before the last lockout, and would’ve been playing for New Jersey until his body decomposed, until he decided to return to Russia for a “stint” with SKA St. Petersburg during the lockout, and retired from the NHL, taking the Devils off the hook.

He was on one of the single most talented teams of the past century of Russian Hockey, and had himself quite a career renaissance after a disappointing end to his Devils career:

Then in 2017, he expressed interest in returning to the NHL. Many teams were interested, and a lot of media stated that Boston was one of those teams, but ultimately LA won out. And how did that work out?

In a phrase? Diminishing Returns.

Kovalchuk started fine, and then began trailing off quickly as the Kings’ other issues began to rear their ugly heads and the team at long last collapsed in on itself. And with the new year, coach and game philosophy of the Kings (get faster, maybe get Lafreniere, get younger), he was quickly looking like an anachronistic mistake that the organization was just hanging onto.

Finally, the Team made the decision to bench him on the 12th of November, and told him he wasn’t going to play. He and his agent have since been looking for a way out. And the Kings gave him one!

They put him on unconditional waivers today.

It has been a rough couple of years for Kovalchuk. So now he is going through the waiver wire, and will be at league minimum 700k for the rest of the season.

So, what are you getting on the surface?:

Kovalchuk still has a great shot. That’s still abundantly clear just by watching him. He’s able to wire the puck past goaltenders, especially down low, in a way that is both uniquely his own way and so effortless it almost makes the shots look weak, and yet it’s usually so accurate the opposing goalie was never going to get his glove or pad on it.

...That’s also about where the unabashed positives start and end.

Kovalchuk’s age has dulled a lot of his former positives. His speed is there, but not nearly as game-changing as it used to be. His defensive ability has all but vanished, and there is a lot of hard mileage on that body of his, with injury being a major concern after a long and storied career.

Kovalchuk over the past four seasons has been circling the drain. And this year has just been the capstone to an NHL return that simply put does not have the same weight behind it as his initial stint. He might’ve been able to control play in the KHL with one of the most talented teams in europe, but as a player past his 35th birthday...he just doesn’t have it in him anymore. 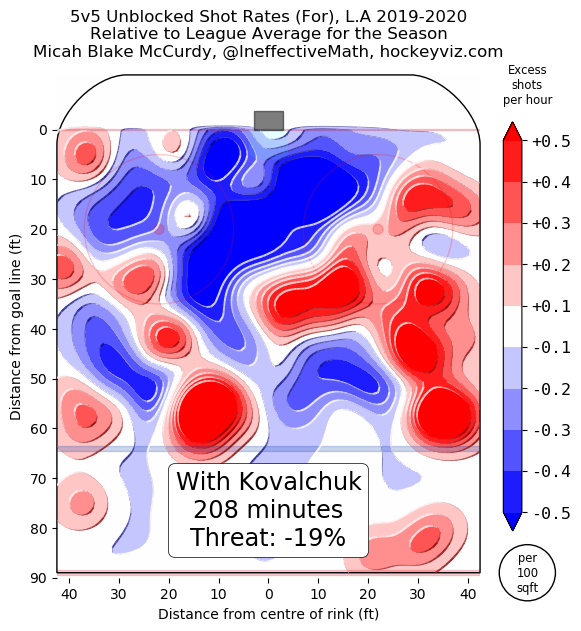 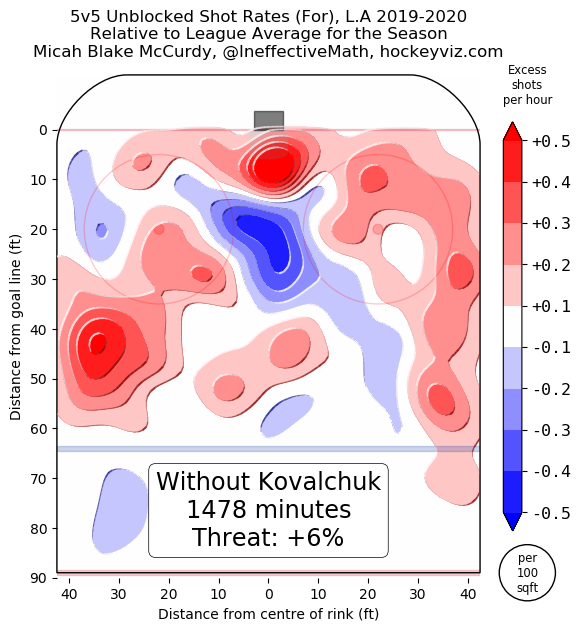 I mean...don’t they have enough players struggling to score from the middle of the ice already?
hockeyviz.com

But wait! I hear you say. Surely Ilya Kovalchuk’s fantastic shot could be best served on the power play where the 2nd power play unit could finally get a major threat! Surely he has value there!

Yeah, well...that isn’t true here either. In fact, one might say Boston already has Ilya Kovalchuk on the man-advantage already in their lineup.

So...yeah. It may not be as fruitful a decision as you might think.

He’s Cheap: Now that a 2.5 Million Signing bonus has been given over to him, Kovalchuk’s actual salary is league minimum. He might as well be like picking up an AHLer.

He’s a name: People still recognize who he is. He brings “Star power”!

The Bruins system has a funny way of getting a good return out of a player for at least a year: It happened with Chris Wagner, it can happen again with Kovy, right?

His Age: He’s an underperforming over-35er. Isn’t David Backes enough for you on that front?

His on-ice results: Which I must remind you, are why he hasn’t played since the middle of November.

His skillset: He would be a 4th liner on a team already stuffed to the gills with depth players who on any given night will be playing as or like fourth liners. It’s not like he’s bringing anything we haven’t already seen.

The Bruins have barely any cap space: Not even enough to sign a league-minimum player, might I add. Even if they wanted to, they’d have to do some creative work with their lineup. A Lineup for the record that already won enough games to have “a spark on the power play” as a want rather than a need.

Gambling on a player like him is not the kind of thing Don Sweeney should be making a habit of: And let’s keep this in mind, he has gambled on his FA signings and most of the time has either won incrementally or squirreled his way out of paying for it long-term (mostly). He isn’t a high-risk bet, but continuing to assume you can “rehab” players just because your system is pretty good is a disaster waiting to happen. Don’t let Kovalchuk be that disaster.

Last season I wrote something along these lines about Wayne Simmonds: a player who sounded like a better idea on paper for the Bruins than in practice.

If I’m being nice, you have even less of an excuse here. Whoever you thought Kovalchuk was when he came back to North America is pretty obviously not coming back. And stands to only get worse with time. There are better players in the Bruins minors.

Would you pick up Ilya Kovalchuk?