It appears that people have, at long last, completely lost their minds.

There were rumblings early in the Toronto series.

They weren’t widespread, but they were there: “What is Pastrnak doing? What is wrong with Pastrnak? Pastrnak has been horrible. Someone please wake Pastrnak up.” Those are, of course, generic takes that come from a variety of sources, born of the same frustrations, but we all know at least somebody who truly holds these opinions.

And yeah, it hasn’t been a great postseason for David Pastrnak. He was stymied in the first round against Toronto, and has had his fair share of frustrations during the first couple games in Round 2.

The rumblings you may have heard or stumbled across early in the first round have turned into a dull roar early in the second, in spite of Pastrnak’s (admittedly lucky) goal in Game 2. It’s become a common enough refrain that it bears addressing: you have completely lost your mind if you truly believe the Bruins should scratch, bench, or otherwise limit the ice time of David Pastrnak.

Two things can be true: Pastrnak can be struggling, and the Bruins can still benefit from having him in the lineup.

We can debate for hours whether or not he’s hurt or just slumping, but the idea that Pastrnak needs to be scratched or benched to “send a message” is completely bananas. Because benching Pastrnak would absolutely send the wrongest message possible.

“We desperately want to lose this series!” 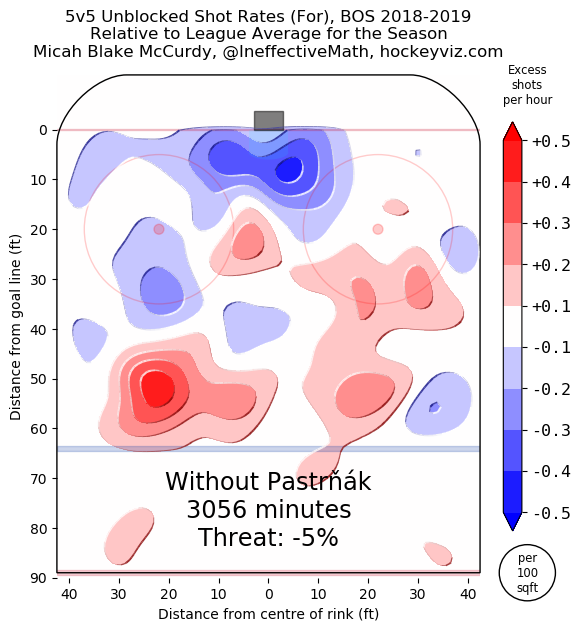 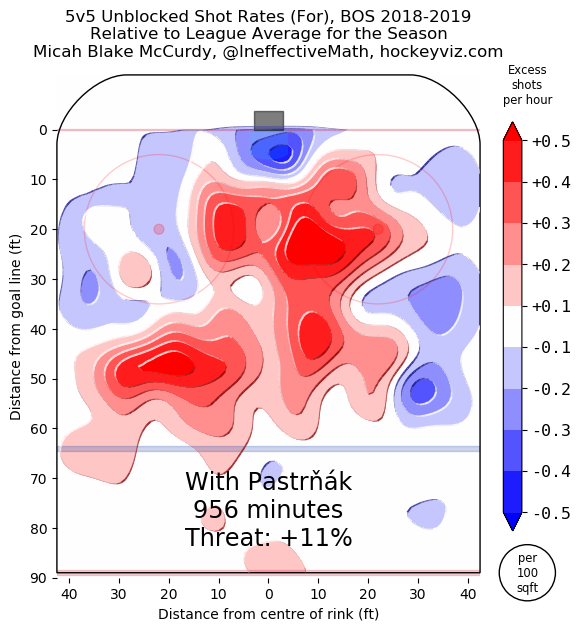 While his production this postseason has been spotty at the absolute best, the reality is the Bruins are a better team with him on the ice than they are without him.
Micah Blake McCurdy, Hockeyviz.com

Pastrnak has been frustrating at times in this series, sure. He seems to be making the extra pass too often, or deking one time too many, or missing his spot with that one-timer that is normally so lethal. Even with all of those struggles, he’s tied for second on the team in points (3G, 4A), two of whom came in an instrumental time in their series against Toronto. He’s tied for third on the team in goals. He’s still producing, just not at the insane level of last postseason.

People will cite his carelessness with the puck as a main source of frustration. The NHL’s “giveaways” stat is notoriously goofy, but he does have the second-most giveaways on the team, with 11.

He’s also tied for the most takeaways with 8, if you buy into those stats (you probably shouldn’t, as they’re extremely subjective).

MAYBE NOT AS MUCH OF A MESS BUT DEFINITELY FRUSTRATING!

The frustration is understandable. When Pastrnak has been way off, the Bruins have usually lost. This makes it easy to equate the defeat with Pastrnak somehow being horrible. At some point, confirmation bias kicks in, and every shift ends up being under a microscope.

As the Bruins are apparently considering bumping Pastrnak down to the third line tonight, it could be a boon for the kid. Columbus is going to have to make some interesting deployment decisions: do your best pairs focus on shutting down Bergeron/Marchand and DeBrusk/Krejci?

If so, that leaves Charlie Coyle, arguably the Bruins’ best forward in the postseason, to run wild with Pastrnak and Marcus Johansson.

Do they focus on Bergeron/Marchand and Johansson/Coyle/Pastrnak? Then you’re giving the Bruins’ most creative playmaker favorable match-ups.

Pastrnak will be fine. He’s had slumps before, and he’s found his way out of them. This is no different.

The real mistake would be to ignore 70ish games of proven success after a handful of flat playoff games and do something absurd.

Don’t let sports talk radio and your own anxiety tell you anything different. There’s always a chance