Raiding California: Can the Pacific’s state of failure make for an intriguing trade partner?

The largest state in the Pacific currently forms its bedrock of bad. Can the Bruins capitalize on what is sure to be a buyer’s market in Cali?

Share All sharing options for: Raiding California: Can the Pacific’s state of failure make for an intriguing trade partner?

As deadline season comes into full effect, the Bruins have quite a few interesting decisions to make regarding their roster, and could very easily make or break their chances at going back to the Stanley Cup Finals. And there are quite a few teams this year that could make for interesting trade partners, and plenty of teams in desperate need of assets...

...and you could easily visit three of the worst on the same plane ticket! How economical!

Why would any of the three California teams want to trade assets?

Why, it’s because they’re all complete trash! For a variety of different reasons!

So yeah. Been a hell of a latter-half of a decade for California hockey.

Which means there’s some interesting pickin’s to be had if you’re willing to part with a prospect or a pick or two.

So what do we have at our disposal to make moves, if we’re Don Sweeney?:

Outside of convincing Bob Murray that certain contracts will work themselves out if he’s patient, it’s a tighter FA window this year than others; there’s not that much cap space to go round, slightly over $2 million if Brett Ritchie doesn’t come back to the NHL, so you’re gonna have to be really careful with how you make your moves. Of course, you can also just say “screw it” and get a rental.

So for this thought experiment we’re going to look at players and contracts that are on the cheap side, have at least a year or two of term or none at all, are forwards (defense I’d argue is more a structural thing right now than personnel), and most of all...valuable.

The third thing is important, as I know Boston’s in the middle of a bit of an up and down performance rollercoaster, and as a result Don Sweeney should go make the biggest mistake of his career for the eighth time, but I made my point on why a player that drives play should be a priority, and I’m sticking to it.

So in addition to problem contracts (a word that here means: “David Backes”), the stuff we should be willing to part with is...here:

You might be saying “But Chris Wagner just got re-signed!” and my response is “Has his first year away from his Acciari-brand training wheels been fruitful enough to warrant being exempt?” and you might also have a qualm about any number of the AHLers, and my response to that is... “Do you want this trade to happen or not?” Eventually you’re gonna have to go and spend your assets if you don’t have room for them or have demonstrated a belief you won’t use them.

And believe it or not, there’s at least one player on each of these teams that could fit this mold in all three teams and finally get the B’s the RW they so desperately crave! So let’s do it!

Ondrej Kase, RW: The Boston Sports Journal’s Conor Ryan recently made an article that advocated for Ondrej Kase as a cheaper but just as valuable deal as Tyler Toffoli. And he’s right; Kase’s deal is easily the easiest to heist potential jewel of the pacific division. Kase is stupid cheap at 2.6mil AAV and an RFA by the end of it, he’s a possession darling, he draws penalties at a reasonable clip, and has been consistently one of the highest shooters per 60 in the league in spite of his usage, which usually has him juggling between 2nd and 3rd line minutes, and when he’s not with those players...they almost universally end up being pretty bad without him. Playing with a guy like David Krejci could see Kase potentially bloom into a dangerous, interesting player in a much more aggressive, structured system like Bruce Cassidy’s where his interest in shooting the puck would actually be rewarded.

Tyler Toffoli, RW: You already kinda know about this one. Apparently Don has his thumb in the pin, ready to pull at any time. Personally? I don’t see much reason not to except maybe to preserve a first rounder. He’s by far the most expensive choice for sure, and would likely mean giving up a fairly high pick or a fairly young player to get him. But the reward for him being healthy and good at hockey is more than worth it; a suffocating offensive and defensive presence that helps all players around him be better than they are, which is no small feat considering the level of player around him at the moment. His skillset is also uniquely suited to being a Boston Bruin, and could easily end up a fan favorite. After all, who doesn’t love a weirdly babyfaced player? Who could jump in and cause some real damage on the 2nd line?

Kevin Labanc, RW: This one scares me as a concept not because of what it could bring, but more because of what you’d have to give up to get him. Labanc has been one of the few objectively good or at least decent defensive forwards on a defensively bereft team, in which even the stars are currently nursing a bad plus/minus. Even better, Labanc is paying dividends for the Sharks at his relatively low cap hit of a million dollars going into next year. Staying out of their own end has been a major problem for the Bruins this season, as well as attacking the slot and the net front. Labanc’s entire strategy it seems, is to do both of these things at the same time. It seems to be a pretty easy solution, doesn’t it? 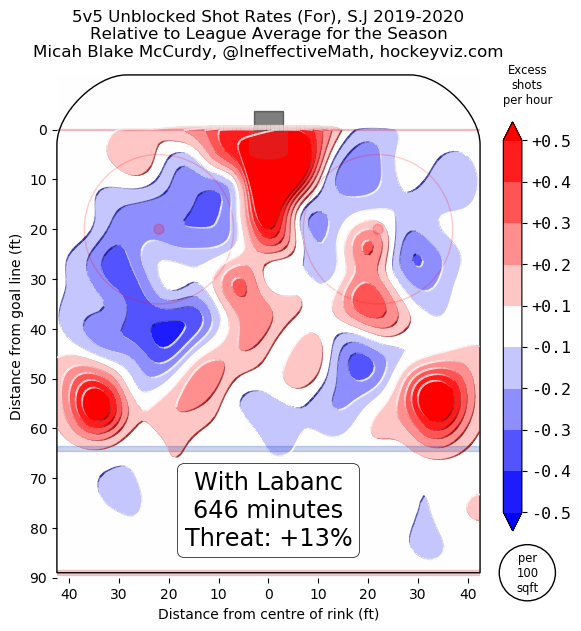 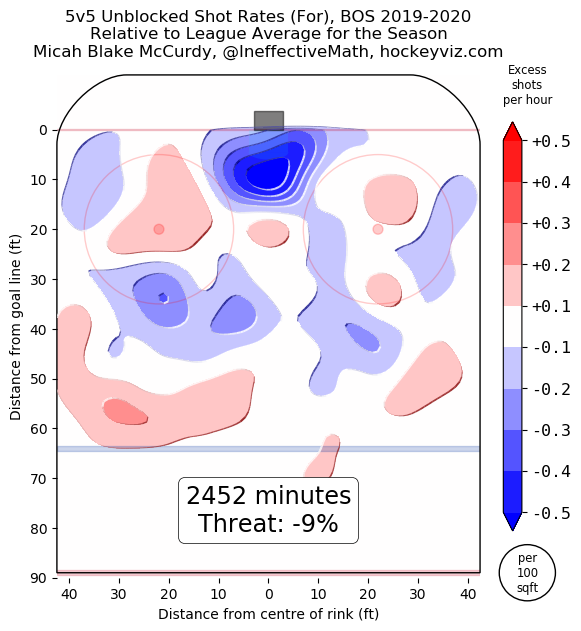 The Bruins could use a player like Labanc to help their flagging ability to attack the slot
Micah Blake McCurdy and Hockeyviz.com

Where hesitance kicks in is that Lebanc is admittedly, he’d be functionally no different than adding another Anders Bjork, and from the fact that he’s currently on a Doug Wilson GM’d team, which means he will likely attempt to tear an extremely valuable prospect from the system like the still beating heart of a cultist in Temple of Doom in a desperate attempt to save his job. Attempting to get him will require some very careful talking up of certain talents.

Of course, this is just a sampler platter of the kind of of places you can go looking for that mythical Right Wing for David Krejci. We’ll be looking at all sorts of places you could go for such a thing as we head closer to the deadline, and maybe some other positions, should the need suddenly arise (and when has that suddenly been a massive problem for the Bruins?).

Until then, feel free to discuss amongst yourselves

Which California team would you prefer to trade with if it came down to it?