Grade The Players: John Moore is, was, and will be replaceable.

Unfortunately for Moore, his days on this team are probably numbered.

Share All sharing options for: Grade The Players: John Moore is, was, and will be replaceable.

Please understand that when I give John Moore this grade, I actually consider it a marked improvement over his disastrous in hindsight 2018-19 season, where in several instances it didn’t look like Moore knew what the hell he was doing.

And while floating in space issues were indeed mostly hammered out, the painful reality of John Moore’s hockey career is that his capability to remain a week-in, week-out NHLer has been significantly diminished both by hard miles as a Devil/Ranger/Blue Jacket, and then by age, injury, and the inherent flaws in his game after that.

See, while it’s understandable if your game takes a hit because of an injury, Moore’s problem has never, ever been his physical attributes or injury that has made him a replacement level talent. It has always been his decision making. His play away from the puck, his positioning.

And none of those things are looking like they’re gonna improve for 2020-2021.

Moore played 24 games in 2019-20, largely in service of either providing a spark to players like Connor Clifton or Matt Grzelcyk, or if those players were injured. He was...fine, most of the time, only rarely showing those glaring flaws of making the “safest” play around the boards (even if it wasn’t always actually safe), and floating in space around his goaltender...but he never got rid of them either. Still he could be caught flat-footed, still he could be caught making plays directly to the other team, he still had a lot of trouble picking up on his man. It’s becoming clear those flaws were not things he was adjusting from one system to another; they were baked into his game from the start.

And fact is, Moore’s skillset at it’s best probably would’ve made him a pretty okay depth defender that solves the “problem” of size on the backend that many fans and apparently the organization has, and maybe one people would like a lot more if his skillset could be improved. But as is, those other, smaller player’s skillsets are just more valuable right now than his because they’re straight up better than him. Because they have the decision making, transition creation, and passing acumen that he just never ended up with.

Because of all of that, John Moore remains on this team for almost $3 million AAV to effectively be a bench guy. There’s value in that, what with the amount of injuries Boston is apparently cursed to have...but not for that much money. And given that the coaching staff seems to trust some combo of Lauzon, Clifton, Miller, and Grzcelyk more than they trust him, he’s going to be an awkward fit for the rest of his time on this team until he is either dealt, picked up by Seattle (wishful thinking) or bought out.

And it’s becoming clear one or both of those things are in his immediate future. 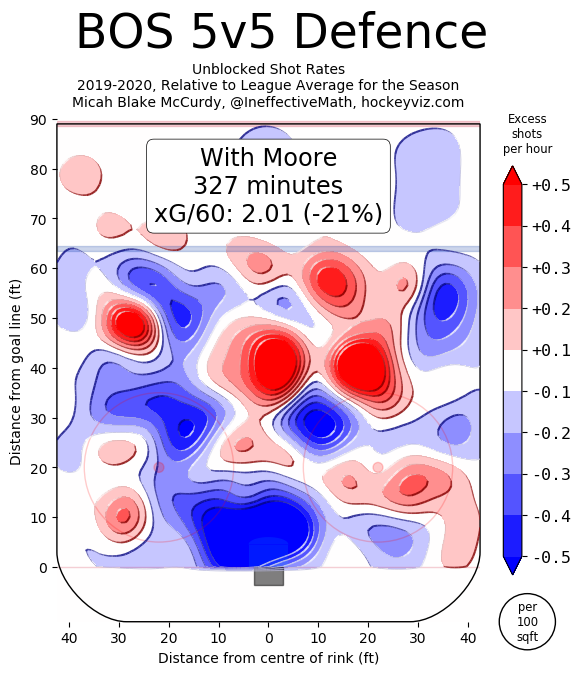 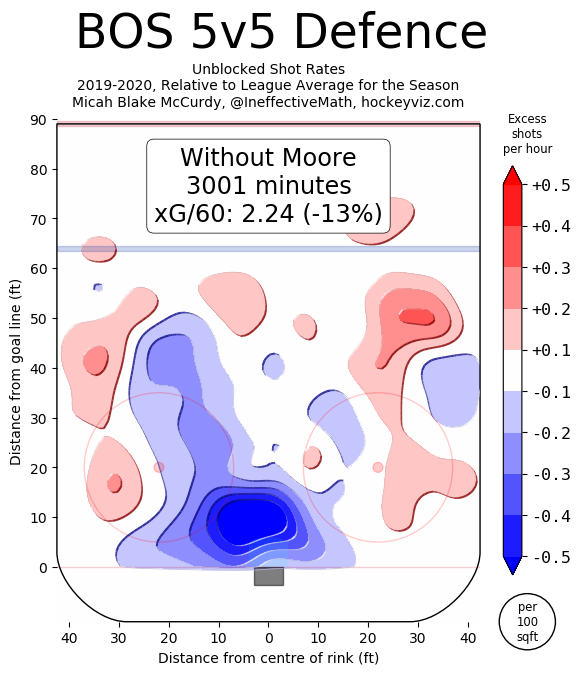 Even with limited minutes, it’s clear Boston’s defense is in less danger of giving up a goal with him off the ice by an order of magnitude.

What’s your grade for John Moore?