Boston vs. New York, a tale as old as time. Have the Blueshirts done enough in their refresh to build a threatening team?...No, not yet.

Share All sharing options for: Know Your Neighbor: The Rangers still need seasoning

3-0 in the Bruins’ favor. Only one of them was especially close.

While the Rangers are getting better after consecutive high-draft picks, what to expect from the Rangers this year is very much like what you saw last year: They’ll be very fast, have a lot of scoring talent, and will almost certainly manufacture a success story in goal. But, they are still in a rebuild, and will be ultimately done in by porous defense, and an even poorer system that is overmanaged and underthought by their head coach. As a result, they will likely be picking in the top 10 of the upcoming draft.

But! If you’d like to read more technical hatin’-ass hating, please read below!

If you were expecting a big leap forward for the New York Rangers thanks to all their young talent, I’m afraid that plenty of signs point to the Rangers are going to have a year that could best be described as “deeply frustrating” by everybody over at Blueshirt Banter.

But that’s not to say you should take them lightly. While they have crippling flaws, they aren’t complete toast. They have a strong enough top six that makes anybody looking at it very excited, they have some defensive prospects that could really change the way they’re looked at in their own division, and of course the best problem to have in the world: Two young goalies who look so good you really can’t decide which one is the starter.

But they’re still the Rangers, and their flaws are still crippling. And they are:

For point one, I really don’t know how to put this any better: Their d-corps is just disgraceful. Jacob Trouba’s ability to backcheck has collapsed in on itself, Tony D is every misinformed opinion you’ve ever heard about Torey Krug except true and infinitely worse (and that’s before multiple social media meltdowns over being rightfully cyberbullied for being a fascist), and their notable pickup at this position was Jack Johnson, who will now be riding pine, and Brendan Smith, who could be replaced with a traffic cone tied to a pair of wheels with a stick taped to it and I sincerely doubt you’d notice his absence. The most notable players on the Blueshirts’ blueline are Adam Fox, who is genuinely good, and maybe Ryan Lindgren who is...fine. That’s it. Two out of six, and the rest are so bad they could very easily cancel out the gains of those two.

Put that against even the prospective 2nd line of the Bruins? It doesn’t matter how well the forwards play, nobody in this new division, let alone on Boston, will have any trouble establishing zone time or shots on goal against this group. K’Andre Miller, who has been their premiere defensive prospect up to this point, will have his work cut out for him, as he’s apparently made the team out of camp.

And that could be an issue, for their second flaw is one that Mr. Miller might find himself up against. As a moment of fairness, rookie skaters are squirrelly, and player development doubly so. Kaapo Kakko, for example, played a ton of hockey the previous year, to the point he had at max, a few days of rest before ending up on an NHL schedule, so it’s only natural to assume that maybe fatigue was starting to get to the kid. But you know what might help players who are going from Europe, to the world juniors, to the NHL?

Where the schedule isn’t so intense, where they can get better used to North American ice, where they can get their skating legs back at 100%, and where they more importantly, don’t get completely filled in and placed into situations where NHL coaches can better identify their weaknesses. Otherwise...you get Kaapo Kakko. Who was fine for the first couple months of the season in terms of results, and then...

Jeeeeee-sus Christ. And that’s not even getting into how the Lias Andersson and Brett Howden experiments have been going, which is to say...one is no longer a Ranger, and the other is...well...not doing any better.

But you know what? That’s all good. It’s not ideal, but they can just carefully platoon their players, maybe lean a little hard on Fox, maybe limit Kakko’s minutes a bit but that’s okay he’s probably going to be an alternate captain in about three years or so, so long as David Quinn doesn’t make any bizarre decision-wait...wait what the hell are you doing, Coach Quinn. David. Dave. DAVE. DA-

Tony DeAngelo will start camp on the left side alongside Jacob Trouba, per Coach Quinn.

Ah yes...Head Coach of the Rangers, David Quinn. While he was at BU, Quinn was by all accounts a pretty good coach and ultimately a pretty strong recruiter, as he was able to get a 165-69-21 total record out of his five eventful years as HC, including a Frozen Four appearance. And to be fair, he’s had to deal with lots of roster turnover thanks to the Rangers rebuild, but that doesn’t change the fact that simply put, David Quinn might be having trouble understanding that some things you do in college might not translate to the pro game.

While the Rangers players on paper have gotten better, at least on the top six, the actual on-ice impact of these players together has been largely stagnant. He showed up in 2018 with a team in the bottom five of xGF%, it didn’t budge last year in spite of their top 6 being moderately strong then, and it’s unlikely to change much this year, and that’s primarily because those high-flyers never truly spend too much time in the opponent’s end of the ice. Quinn has never been the model of a defensively minded coach, but at the pro level, it’s clear he’s simply not up to the task unless he has transcendent talent, to the detriment of any of his gifted offensive players.

But part II! Until a late-season run towards competent defense play, NYR allowed one of top-5 highest rates of xG against in the modern stats era (since 2008). If they look anything like the 2019 Rangers again, that could be mighty ugly in the realigned NHL's toughest division. 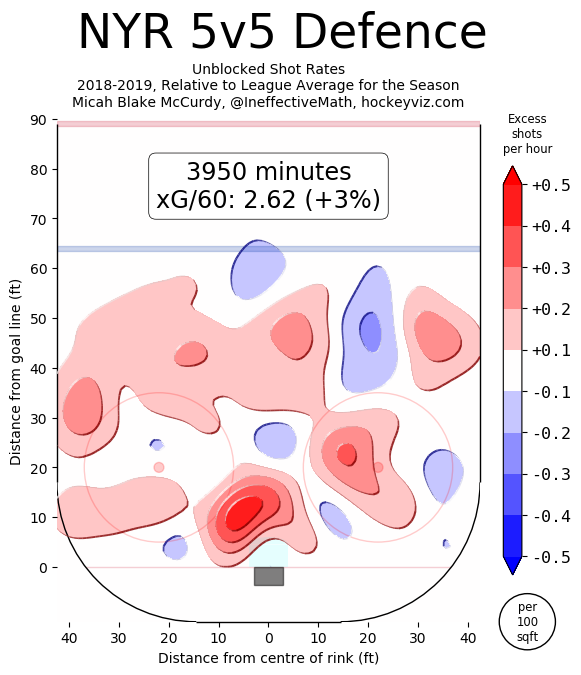 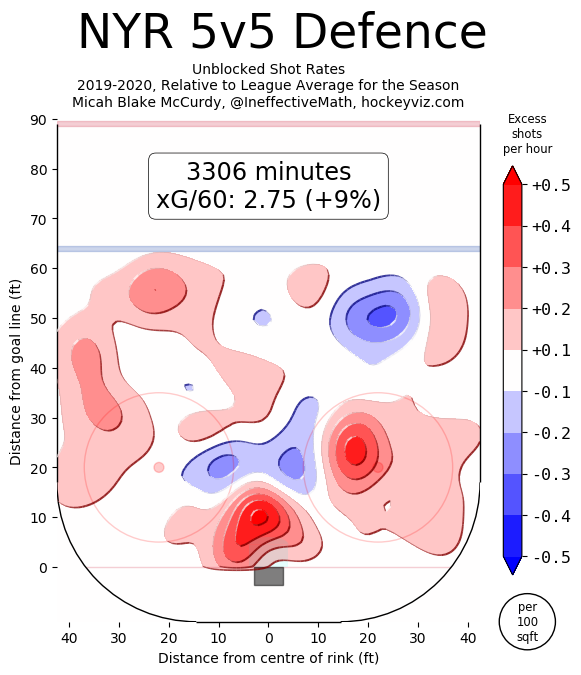 And you’re adding Jack Johnson to this?
Hockeyviz.com

Further, for a guy coaching a team full of young players, he certainly has a big problem with actually developing and actually playing them, as the cutoff over time for all of his youngsters tends to be...clear and pronounced. His tendency to put rookies in the doghouse in service of older, worse players is simply an untenable solution on a team that is ultimately trying to build itself back up from within.

The Rangers, on the other hand, do not like to give their young players (good or otherwise) important minutes. pic.twitter.com/qCXAZruFCD

This isn’t the difference between sophomores and seniors, Dave. Some of these guys aren’t gonna be motivated by watching Jack Johnson suck. All this adds up to a coach who many Rangers fans either would prefer to see massive changes from, or an outright firing.

All this leads up to team that will likely severely disappoint national commenters and overzealous Rangers fans come the end of this very short season. This new East Division may be far from perfect, but it is unquestionably a much tighter battle than the other three, with at least three teams that will be making the playoffs, and only one spot that’s really up for grabs. A team with issues this pronounced will have a very high likelihood of utter collapse under that kind of pressure. They’re close...but not that close.

If you’re looking for a team from New York to surprise everybody, your best bet is probably Long Island. Otherwise, I highly encourage you to put any hype of the New York Rangers you see over the next few days under some real scrutiny, because it’s not looking like they’re ready, willing, or even able to make the next step without making some serious overhauls to critical parts of their game.

And if you have any concerns about this analysis or the interpretations of the data, I highly recommend you email me at newyorkrangers@thegarden.com!