What are the Islanders doing to beat Boston?

There’s gotta be something the Isle is doing to beat Boston this consistently, right?

Share All sharing options for: What are the Islanders doing to beat Boston?

So. About them Islanders.

In three games, the Bruins have yet to best the Islanders in a 60 minute hockey game, and it’s kind of become a...thing. Culminating in what is probably going to hold up as the B’s worst game of the year.

So, rather than wallow in that or ignore it, I decided to look into the last three Islanders games, and see what the B’s have been doing wrong, and what Long Island has been doing right.

The Islanders have been able to attack the Bruins at a strength, by using transition

Ordinarily, net-front defense has been a strength of the Bruins over the past few years, and that hasn’t changed at all over the course of the 2020-21 season, and speaks highly of Bruce Cassidy’s system in spite of changing faces in defense.

However, over the past four games against the Islanders, Boston has been getting victimized badly against the Islanders in the slot and especially in the crease, culminating last night in a bad way. But why? How are they able to break through this otherwise strong defensive front when teams with better forwards or at the very least better records can’t?

Simple. They almost never let them set up, because they otherwise choose to exclusively attack the Bruins from transition.

I decided to watch every Islanders goal scored on the Bruins this year, partially because my concept of self-preservation has been all but been spent on not contracting bad lung virus so in comparison that twinge of disappointment doesn’t even register anymore, and it became clear almost immediately that the Isles have decided that their skating speed at a full charge is realistically the preferred method, and have opted to stretch out the ice in front of them in order to take advantage of their skilled players’ skating speed.

Patience is a virtue pic.twitter.com/dPkM2nJLOe

Of the goals scored against the Bruins by an Islanders player at any strength, a good number of them have come from the first shot attempt taken from a successful zone entry by one forward or from a breakaway, especially those scored while on the man-disadvantage. By forcing the B’s defense, which is generally trading on size and physicality (for the most part) to correct on the fly, it allows these speedy transitions and these wildly high-danger chances that have made playing the Islanders so frustrating.

Conversely, they also exploit a weakness in Boston’s system that has gotten steadily worse over time to great effect

Hey kids, are you sick of hearing about the Boston Bruins 5v5 play? Yes?

Well that’s too bad, because we’re talking about that again, but I’ll keep it brief. The Boston Bruins have largely been getting by over the past couple of years based on elite defense, goaltending, and a first line that’s almost a gamebreaker, with a series of lines largely designed to occasionally score, but mostly just set the truly talented players up to succeed. And it has never been more painfully clear than this year, where the Bruins offense has apparently completely ceded the net-front as a viable place to score, to the point that even if yes, they do go out and count the Nick Ritchie goals scored this year, one could almost call it an outlier. 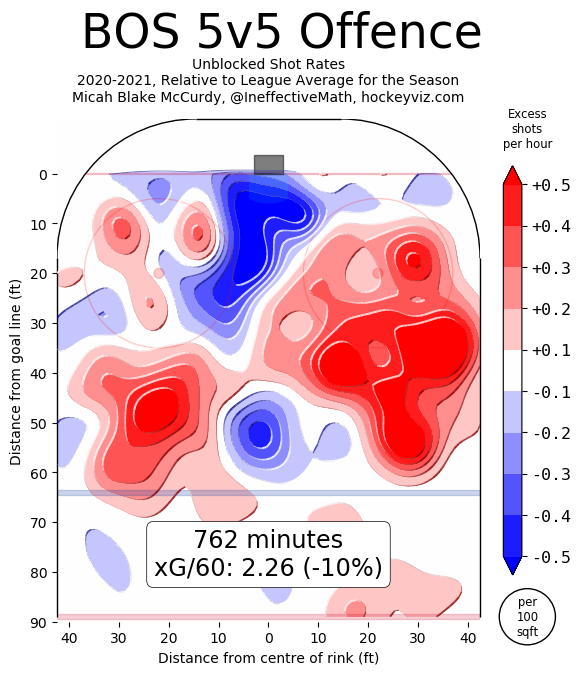 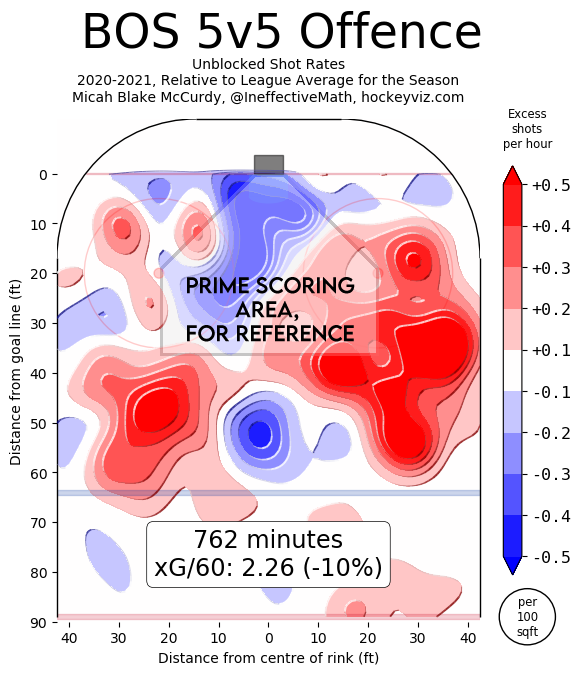 Fun fact, because Micah was updating the site at the time, I had to wait like ten whole minutes while it loaded, and listen to a Sisters of Mercy song and play DOOM: The Plutonia Experiment in the meantime. I hope you appreciate it.
HockeyViz.com

As a result, the Islanders, who have largely parked their keisters right out in front of Semyon Varlamov, have been great at taking the B’s second chance opportunities away from them, and have ultimately been part of the reason they struggle to score against the Blue and Orange: They were already having trouble scoring at evens in the middle of the ice, and so all they have to do is keep the B’s shooters from finding lanes and harangue them on the boards, and they have a recipe for success towards keeping the Boston Bruins from scoring.

Oh, and don’t expect the Boston power play to save them, New York tends to get the Bruins to make dumb mistakes this year, not the other way around. They have 28 PIM over 3 games against the Islanders, compared to New York’s 16.

JG Pageau has been placed in a position to gut the Bruins.

For whatever reason, the Boston Bruins seem to have completely forgotten that in spite of a career of playing for teams who aren’t especially great, Jean-Gabriel Pageau is still a pretty solid forward. And he’d have to be. Because half of all goals he’s scored this year has been against Boston.

Pageau, who is if nothing else, a reasonably fast skater and a good shooter, fits point one perfectly as a responsible target who can take a good shot that a flipped up puck can get to, and the Bruins goaltenders can only get shots put on them from the most dangerous areas of the ice for so long before one goes in. And wouldn’t you know it? Of the four goals Pageau has scored on Boston, a couple of them were pretty impressive transition goals, or right up on the goalie’s grill! Isn’t that funny?

Things we love to see:

Look, this defense is young, and getting younger with every player that ends up day to day thanks to a knuckle being bent out of place or an unfortunate fall. And that doesn’t just absolve the forwards of their backchecking duties either. I don’t think I need to tell you that this last seven goal drubbing could’ve easily been a much less disappointing pill to swallow were it not for a pair of failed clears courtesy of Brandon Carlo and Trent Frederic, who will likely be seeing these sequences whenever they close their eyes for how many times they see them while reviewing film.

Pelech on the rebound! pic.twitter.com/OmNpHyLZPL

Doing less of this could pretty easily help cut down on having to play from behind against the Isle.

There’s also one other thing...

The Islanders are actually a good team now, and no longer have to live on Semyon Varlamov or Tomas Greiss playing their hearts out every night to attain defensive acclaim!

The Islanders last year were a surprise in the playoffs, primarily because while they had talent, they still had crippling deficiencies in how much time they spent in their own end, and often couldn’t make up the difference...for the first part of the year. They got better throughout the season and much of that was made of Barry Trotz’ system, which when given time to mature tends to do wonders; as their run to the ECF showed, where they lagged behind much of the league in shot attempt metrics, but were top ten in high-danger chances. They didn’t shoot much, but they seemed tailor made to make it count. It helped of course, when that wasn’t working, they had their strong structure and Varlamov/Gress’ similar .915%-ish Save-% to sit back on that only got better in the postseason.

And while they made a spirited effort against the Lightning, the Lightning were in another class by that point, as game one of that series showed. They were closer than they’d been in a long time, but needed more time for the system and the players within it to synergize.

Come 2021, that synergy has more or less taken root. While they absolutely started slow, the Isle have gone from 3rd from bottom of the league in pretty much any advanced metric you could ask for, to at-or-above league average, and are 3rd in high-danger CF% in the entire NHL. That is not just marked improvement, it’s almost like a different team took the ice; they’re shooting more, and they’re shooting in the places that get you goals. While their individual shot metrics and insistence on some...less than favorable talent do indicate that they may have some cold nights (and already have had some, don’t you worry), if you make enough mistakes at once in front of them, they can still punish you pretty badly.

And last night, the Bruins got a front row seat on what such punishment could look like.

So what does this mean for Boston?:

Extremely little in the grand scheme of this season, for the most part.

The East Division was going to be tough no matter who ended up making the next step. Boston’s great play up ‘till recently has largely been against much of the division’s best: Washington’s still good, Philly theoretically is good, and there was an expectation that some team from New York was going to end up being better than they previously were, and as it happens, the team that went the farthest last year has currently shown the most improvement.

It’s almost like Barry Trotz is good at his job or something.

Can they turn it around on the Islanders?:

Of course! The halfway point of the season is still over 10 games away, and they have five more games against Long Island to course-correct. The Isle still have some of that 2019 “turtle up around Varlamov” stink on them, and it’s showed if you can keep them pinned down and attack them with speed: they’re 1-6 against the other top teams in the division, and more than one of those Ls were games they controlled, for the most part!

They just have to keep them pinned down, limit mistakes, and try attacking the slot. And they've done it before.

Oh, and beat all the other teams to make this little streak not matter long term. That’s important, too.