Bruins vs. Caps: Tale of the Analytical Tape

Let’s crunch some numbers together.

Share All sharing options for: Bruins vs. Caps: Tale of the Analytical Tape

Unless otherwise stated, all statistics and charts were taken from HockeyViz.com, Evolving-Hockey.com, and NaturalStatTrick.com. I’d like to take this minute here to thank Micah, the Twins, Shawn, and the NST team for all their hard work, and I’d easily suggest giving them money to keep this up!

Playoff time is almost here. One last sleep. So let’s take this opportunity to get as deep into this as possible. Let’s get right into the nitty-gritty math of the entire thing. Let’s go into the analytics, bit by bit.

Dan did a good write up over the generalities of the games, but from the analytical side, there are some issues we have to overcome: this particular sample size is that it is A) Small, and B) had a last game I could not in good conscience describe as a normal Boston Bruins lineup that would produce similar results to any of the others, so I had to cut that one, making that sample size even smaller.

But there are things that we can kind of glean from all of the games in abstract, like:

But all of that is in deep abstract. Let’s pull apart each team’s base components to see if we can come away with any real conclusions

On Offense: Depth is the key

For the record, this is only pure five on five, even strength hockey we’re talking about. We’ll be talking about special teams in another section.

The Bruins and the Caps have a lot in common at least from the fallible eye test side of the game: They’re both puck possessing teams that have plenty of physicality and “snarl” to supplement speed and individual skill with the puck, often times to the point that the physicality and snarl become almost the focal point for discussion.

The point of the numbers then, is to cut away the discussion and get down to brass tacks. Does Boston have an advantage on offense? For at least the top six, I can probably say yes.

One thing that is 100% clear is that while both coaches have a clear distinct bias for defense, it’s clear that both teams have a bizarre fascination with shots away from the slot, whether or not it’s because of changing methods of defense or because of individual strengths in backchecking, the point stands that their shots are normally coming from away from the net, but have clear biases in where they want to shoot. 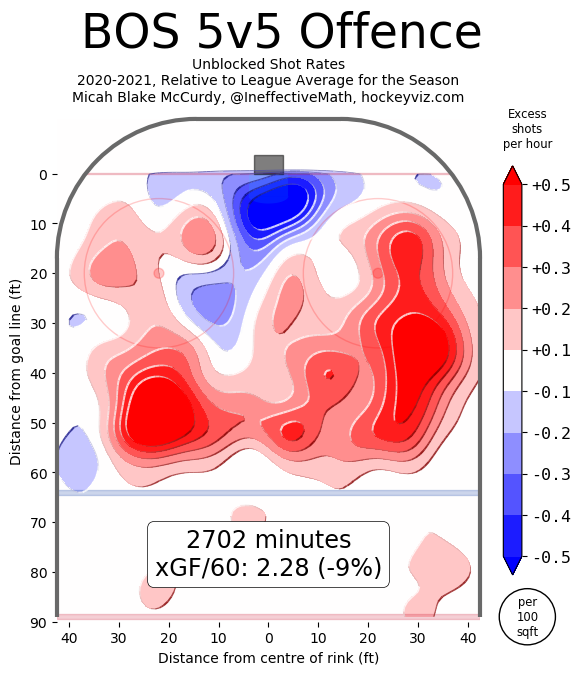 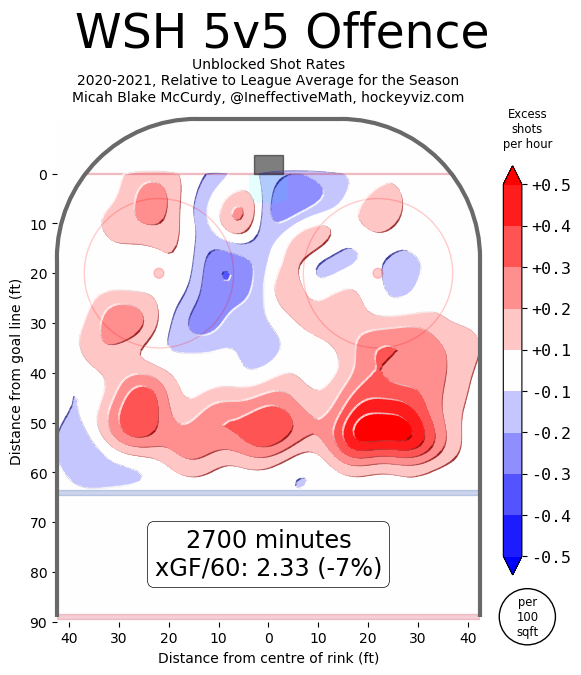 gee I wonder where both of these teams like shooting from
HockeyViz.com

Where they get their goals from however, is where it changes considerably. Washington’s been able to score from pretty much everywhere, whereas the Bruins have one place they thrive: The Slot/High Slot. Boston puts more shots on, but Washington is naturally quite good at picking that left side, especially on that power play of theirs. 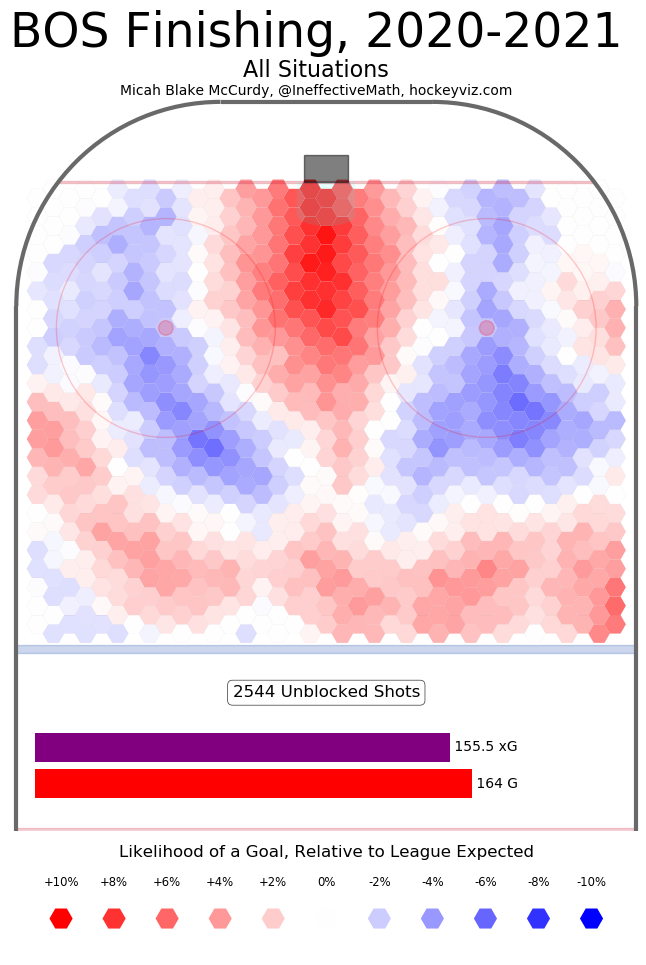 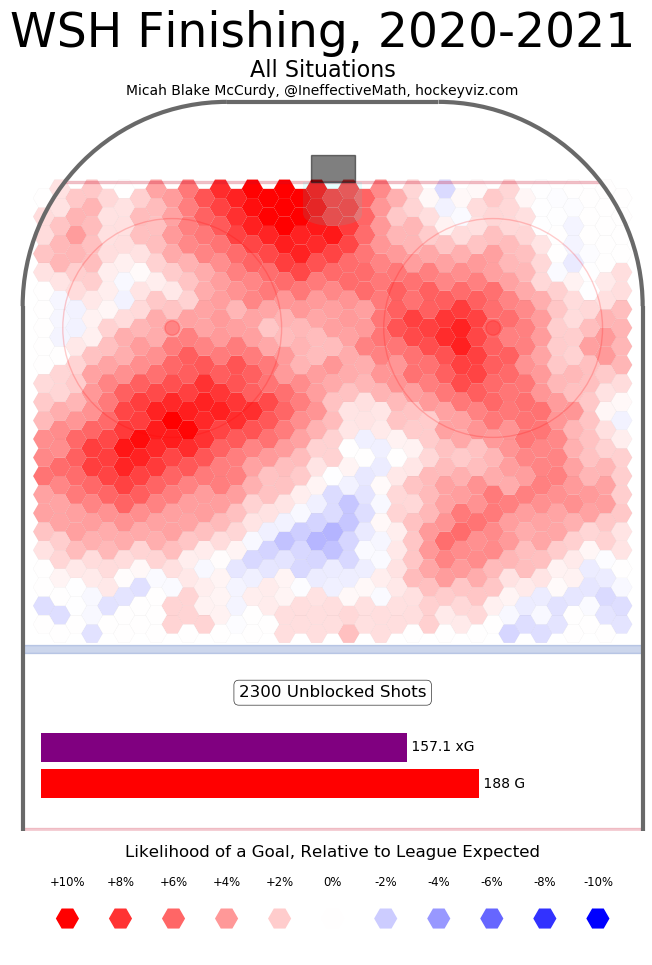 The locations Washington and Boston score from the most
HockeyViz.com

In a line by line comparison, the same principal holds: It’s very hard to say that a line of Ovechkin - Backstrom - Mantha could be in any way pedestrian, but in comparison to the Bergeron line this year?

All three of the Bergeron line are once again first, second, and third respectively in Shot attempts, unblocked attempts, and Expected Goals For %’s on the B’s. Backstrom and Mantha? Somewhere in the middle, doing alright for what they are...but Ovie? Ovie’s individual prowess may still be there, but over those 45 games he’s played this year, he is the Caps’ least impactful forward in unblocked attempts and expected goals. The usual wisdom between top lines is to try and compete together...but they’re probably not going to be doing much other than trying to keep things under wraps.

As for line 2? It’s a little more interesting. Lars Eller, e’er the favorite of B’s fans from his time as a Hab, is probably one of the Caps’ best players this year, even if his goal totals aren’t anything to write home about, as well as Conor Sheary, who’s been playing out of his mind, and of course...Tom Wilson. Who shall herefore go unrecognized and unremembered until we have to talk about the player he ends up paralyzing. He’s fine. Krejci meanwhile, has been pretty good, a respectable 6th among skaters in xGF%, with Smith being right behind him. Normally, i’d be saying that Krejci and Smith would have to put in some real work if they were linematched against this group...

...and then Taylor Hall showed up.

See, the thing I sort of neglected to say in the section regarding the first lines is that I used the usual cut off TOI of 300 minutes. And in that framework, the top line remains the best on the team. But cut it down to 200 minutes? The best forward on the Boston Bruins is Taylor Hall in a walk. He has been playing like an absolute maniac since he got here, and leads the team in all relevant categories. With him out there, David Krejci’s pass-first mentality supplemented with Craig Smith’s shooting?

Caps are gonna be in a world of hurt when line 2 hits the ice, regardless of how hard they think they can hit. You can’t come off your line to go be physical if the guy taking the hit can pass like Hall can.

Of course, they may not have to, because what will almost certainly decide this is the same thing you’ve heard about since January: The depth, the depth, and the depth yet again. We already know that the third line is going through some stuff due to the nightmare season Charlie Coyle’s going through, and the ultimately replaceable play of the entire fourth line will be a major factor going forward. The Caps have guys like Carl Hagelin and an improving Garnet Hathaway in their depth. It’s going to be a major uphill battle for the depth, and Chris Fevens was on the money in his discussion of him as an X-Factor: If Coyle can’t get his act together, there could be some pain afoot.

On Defense - Weird place to be:

Laviolette and Cassidy’s systems could say quite easily that they value defense, and both teams do a great job keeping the crease clean for the most part, I think Cassidy seems to understand the assignment better than Lavi has this year, with a Team Save-% far outclassing Lavi’s, as well as a pretty noticeable ability to limit opportunities. 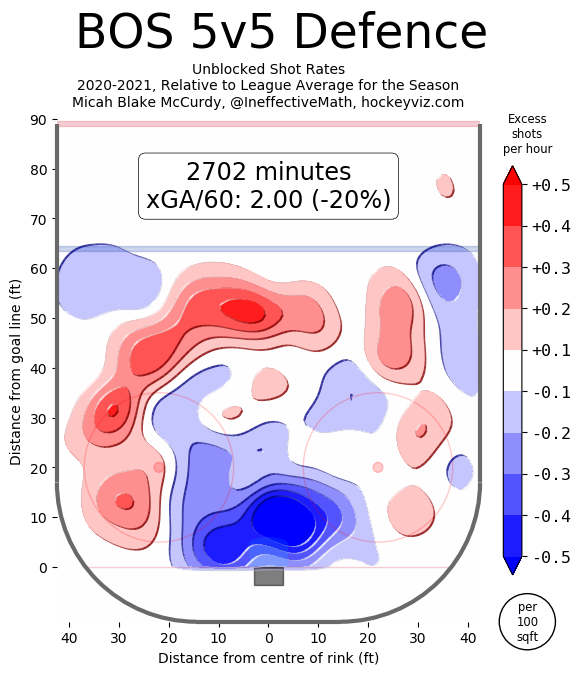 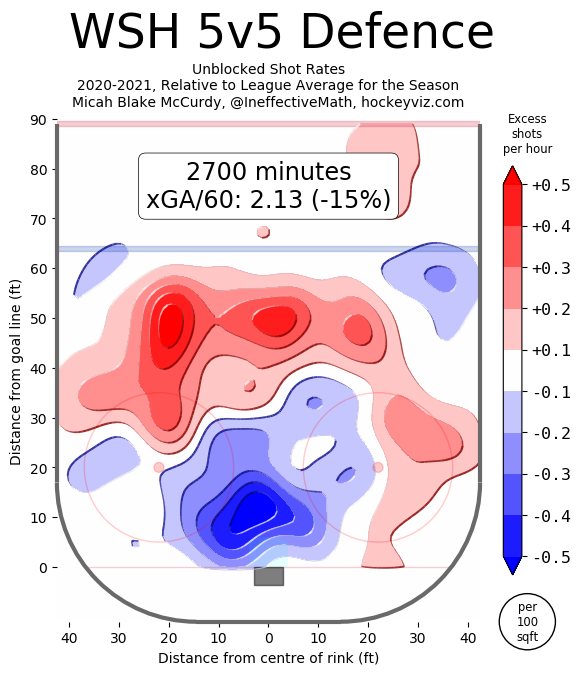 While it’s close, it’s not that close.
HockeyViz.com

...It of course, helps that Charlie McAvoy is probably a Norris Finalist if not the eventual winner, which he very much should be, something that no Capitals defender could lay claim to this year. Hell, the number of Washington players whose on-ice impact measure up to Matt Grzelcyk’s this year is shockingly low.

...but of course, where the Bruins have a higher ceiling of talent, like the work that an underrated pickup in Mike Reilly, a fully healthy Brandon Carlo, and McAvoy are doing, the Caps have a much higher floor. I like what Jeremy Lauzon and Kevan Miller bring to the table, they’re scrappy, they can do some form of defense, but they’re also not especially fast, and while Washington’s game is physical, they still have some burners in terms of speed that guys like Lauzon have had special trouble dealing with if they get turned around. They’ll have to play well above their paygrade to deal with some of the talent coming up in front of them, but from what I think is a tale of two decent systems, the Bruins have an advantage here.

This one is much easier to do for one reason:

The players Boston has been using in goal are performing infinitely better than any of Washington’s current talent. And that includes Craig Anderson, at least in the abstract.

While the Bruins goaltenders (and that includes all of them, not just Rask) have “problem” spots, like by the left point and just above the right circle, they are otherwise a team that allows goals from places that are fairly “normal” by NHL standards; right in front of the goaltender and in the slot, and fairly minimally everywhere else. The Caps meanwhile have had a real problem in their net in spite of their prodigious defensive system, due to their bets on Samsonov and Vanecek having only kind of paid off. The results have spoken for themselves more often than not: The Bruins have dumped 27 goals on the Caps to their 22 (9 of whom largely came against an AHL roster), and have been able to make otherwise shaky goaltenders look absolutely putrid if properly pressed. 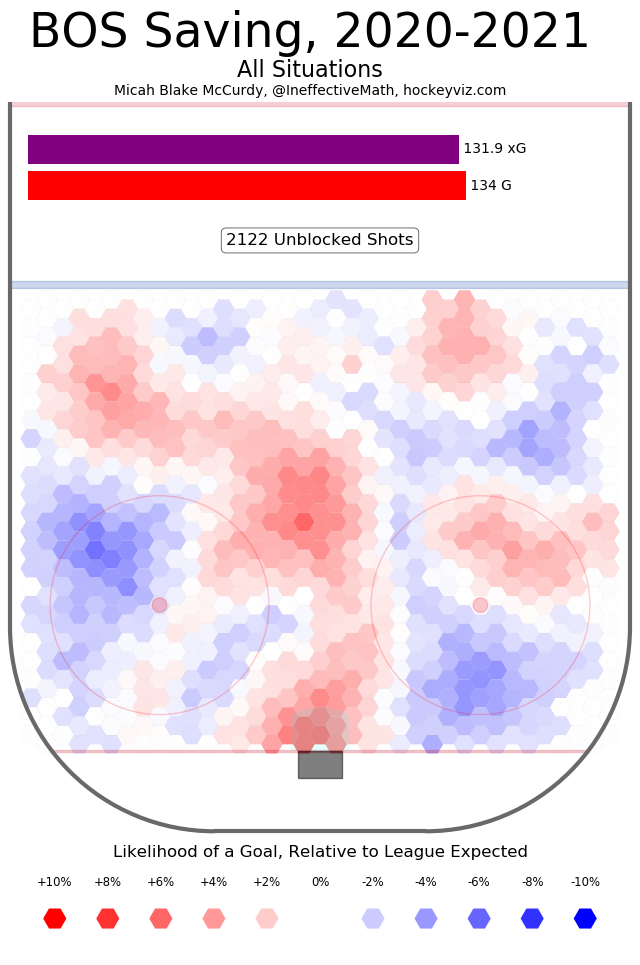 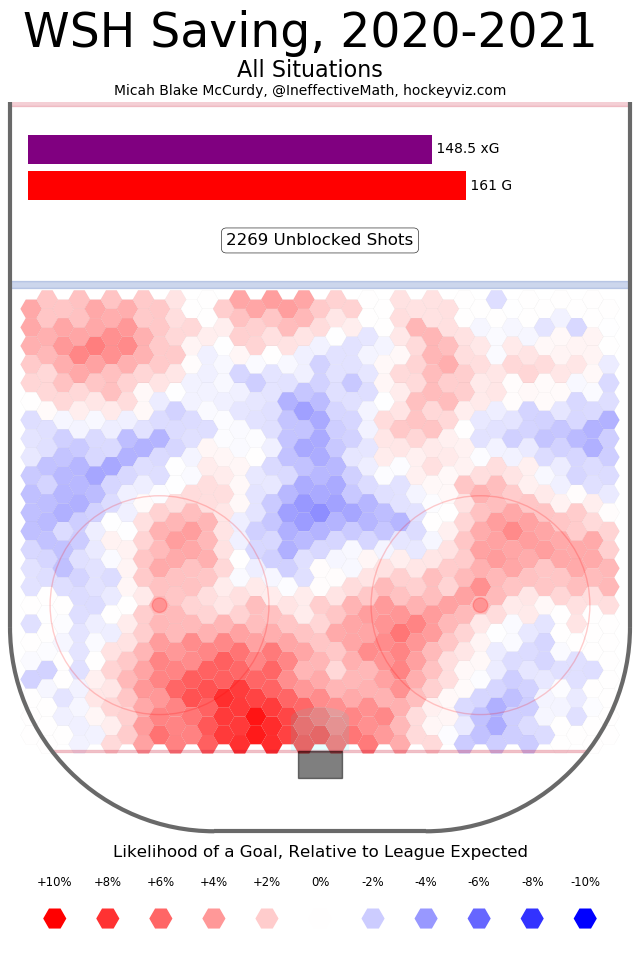 The most damning evidence is simply in the High-Danger Save-% lists, where Boston isn’t the best, 13th in the league, but Washington is truly, unbelievably bad; clocking in at 30th overall with a High-Danger SV% of just 79.32%. The only team worse is Philadelphia. The Bruins also just acquired one of the best breakaway getters in the league in Hall.

In short, if this goes sideways on the Bruins, it is either because someone’s hurt or very, very out of it, or the defense has collapsed in on itself in such spectacular fashion we’ll be writing about it for years.

Special Teams - You take one side, I’ll take the other:

...versus a top three penalty kill.

The real X-Factor here is that while the Caps undoubtedly have the better power play, it’s all dependent on exactly how powerful it’s play is given that almost every player that’s instrumental to it can’t be at 100% due to most of their heaviest hitters having been Day-To-Day as late in the season as Tuesday, with several still in COVID Protocol (Evgeny Kuznetsov says hi). If it stays that way, they could be in real trouble.

But don’t count Washington’s penalty kill out; they weren’t necessarily pushovers in that department during the regular season, finishing as 5th in the league in that column. Whatever Bruce has the guys doing in practice during the power play drills, let’s hope he finds a way to make it work, because the talent he has on-hand is simply too potent to be down all the way at 10th. Surely he can find a way to get a little more blood from this particular stone, yeah?

Pretty much what your heart tells you: It’s gonna be a close, fun, painful series that’s gonna make everybody really mad no matter what happens, but it all really depends on two major things: Caps goaltending, and the Bruins depth. But it will be a fun bunch of games, and the “In Six” predictions definitely feel like a reasonable amount of games for this series.

And I for one, cannot wait.